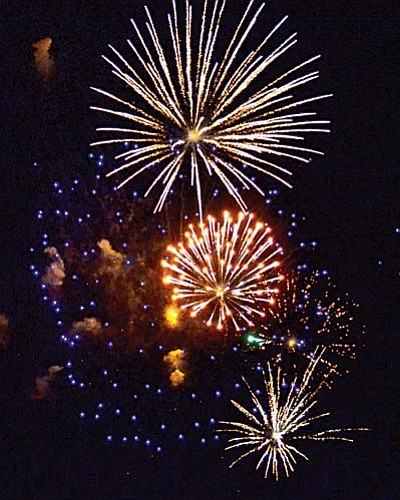 COTTONWOOD-The 13th annual Independence Day fireworks display will be safe, assures Interim Cottonwood Fire Chief Mike Kuykendall. The chief says he has received a few calls and emails worried that the City would proceed with fireworks in the hot and dry conditions.

Kuykendall says the location where the fireworks are launched each year makes the activity less prone to fire. The site at the Verde Valley Fairgrounds is backed by the old UVX slag pile, a pile of solid rock. In addition, fire crews prepare the site every year by clearing out any vegetation around the perimeter of the launch site to make sure nothing is ignited by any stray embers from the sky rockets.

"Cottonwood's location is certainly the safest location in Northern Arizona and possibly the safest in the state," Kuykendall says. As an added precaution, firefighters and engines will be stationed around the site. Fire equipment will be place Cottonwood, Jerome, Clarkdale, Verde Valley plus Forest Service wild land crews.

"One of our biggest concerns is the potential for individuals to use illegal fireworks rather than by trained professionals at the Cottonwood show," he says. Personal fireworks are prohibited in Cottonwood and in Yavapai County now as well. They remain dangerous in northern Arizona forests.

The monsoon weather is also going to benefit conditions for the fireworks show.

Temperatures are expected to be five to 10 degrees cooler than it has been in recent weeks and, for one of the first times this summer, the skies will be mostly cloudy with a 40 percent chance for showers. Winds will be less than five mph.

Even so, Chief Kuykendall says fire crews can postpone or even cancel the show up to the last minute if necessary.

Pre-show activities start at 4 p.m. on Independence Day leading up to the fireworks. There will be children's activities, water slides, giant inflatable rides, and a watermelon eating contests.

Free food is provided courtesy of Fry's Food & Drug and prepared by Hog Wild from 4 until 6. Soft drinks, glow necklaces and other items will be available for purchase.

Beginning at 7:45 p.m. there will be music, presentations, and a patriotic salute by the VFW Color Guard.

Be in place by 8:45 for 35 minutes of the sky light show to celebrate our nation's freedom.

Admission is free. Parking is $1.