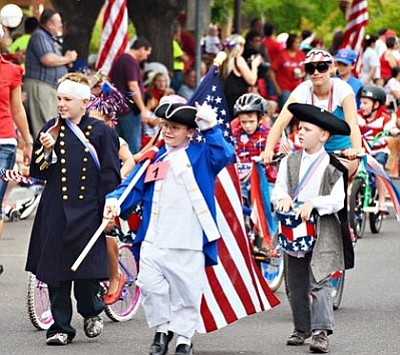 It's a tradition that held special significance for Clarkdale when the town unrolled its annual Old Fashioned Fourth of July celebration at Clarkdale Park on Wednesday morning. Banners posted in the park, and carried by participants of the Children's Parade, celebrated the Centennial anniversary of the state and the town's founding. There were any number of activities to take part in during the remainder of the morning, including: free fire engine rides with the Clarkdale Fire District, carnival games hosted by the Jerome-Clarkdale School, an Ice Cream Social sponsored by the Clark Memorial Library and music performed by the Cottonwood Community Band.