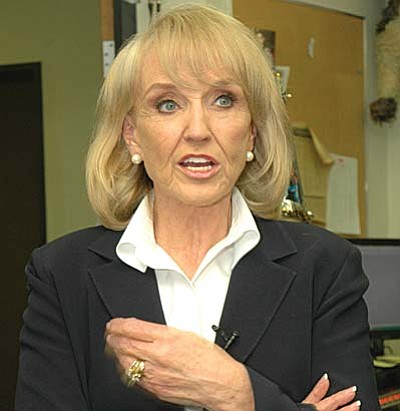 Gov. Jan Brewer is rejecting a plea from county attorneys that she order the state health department to stop issuing cards for people to legally obtain marijuana for medical reasons and not to license dispensaries to sell the drug.

PHOENIX -- Gov. Jan Brewer is rejecting a plea from county attorneys that she order the state health department to stop issuing cards for people to legally obtain marijuana for medical reasons and not to license dispensaries to sell the drug.

"The federal government is vigorously enforcing the Controlled Substances Act by seizing and closing medical marijuana dispensaries in other states,' wrote Yavapai County Attorney Sheila Polk on behalf of 13 of the state's 15 county attorneys. And Polk said she has been told -- she does not say by whom -- that John Leonardo, the new U.S. Attorney for Arizona "fully intends to prevent any dispensaries from operating in Arizona by seizing each and everyone one as it opens and commits violations of the Controlled Substances Act.'

Yet Polk said the state health department continues to issue marijuana user cards -- nearly 30,000 by this point -- and is proceeding with plans to license 126 dispensaries.

"We believe it is bad public policy for one arm of the government to facilitate marijuana cultivation and use while another arm of the government is moving to close it down,' she wrote. And Polk said that the state is encouraging would-be dispensary owners to get the capital, obtain necessary permits, sign leases and pay a $5,000 application fee "known full well that these business ventures will result in significant financial repercussions when the U.S. Attorneys shuts them down.'

But Brewer said she does not intend to stop anything -- at least not without a court order. In fact, the governor tried to get just such an order, but without success as a federal judge refused last year to rule on Brewer's request to clarify whether the state's medical marijuana program can proceed in spite of federal law.

Brewer also noted that Maricopa County Superior Court Judge Richard Gama, in a separate ruling, said Brewer had no right to ignore the 2010 voter-approved law setting up the state's medical marijuana program. And that, the governor said, ends the discussion.

"I am duty-bound to implement the Arizona Medical Marijuana Act, and my agency will do so unless and until I am instructed otherwise,' Brewer wrote.

Polk's concern about state officials being prosecuted has not been shared by state health chief Will Humble.

From the moment the law was implemented, his agency was issuing the cards that allow those with a doctor's recommendation to obtain up to 2 1/2 ounces of marijuana every two weeks. Humble said he was not concerned because his employees were simply processing paperwork and neither handling nor testing the drug.

Humble did delay implementing rules for licensing dispensaries after Brewer sought that federal court ruling about having the state license businesses to grow and sell marijuana. But he relented after the federal judge refused to say there is a conflict between state and federal laws.

The first dispensaries are expected to be licensed within weeks.

The two prosecutors who did not sign the letter to Brewer were from Coconino and La Paz counties. Efforts to reach both late Monday were unsuccessful to find out if they did not agree with their counterparts or simply did not have the opportunity to sign the letter.