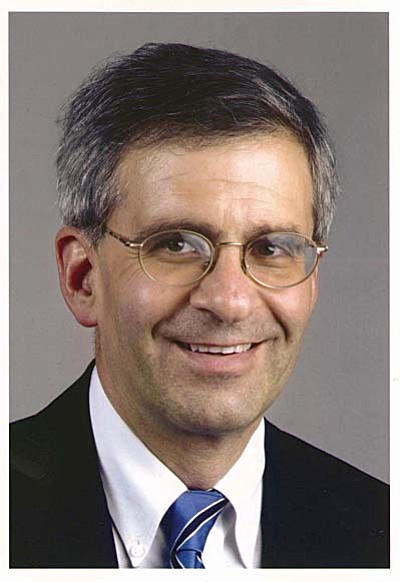 WASHINGTON -- Walk through the Hall of Presidents in the National Portrait Gallery and you will see much of American history within a few steps. Over here, hand on chin, is Abraham Lincoln, who saved the Union and set the nation on a course toward racial justice. Over there is Franklin Delano Roosevelt, cigarette holder in hand, architect of the New Deal and of victory in a terrible World War. At the end of the hall is a stunning Chuck Close portrait of Bill Clinton on loan to the gallery that reflects the complexity of the 42nd president.

But this is more than a museum. It is a metaphor, and the image you might take in the middle of a spirited political season from these hushed halls might be one of a lending library.

This library, to be sure, has only 44 volumes. One is unfinished. All are subject to revision -- and revisionism.

The 16th volume is always in high demand, especially so in the Obama years, with a presidency patterned so self-consciously on the Lincoln model. The 35th is slender but well worn; quotes from John F. Kennedy have been in style for a half-century. Hardly anyone pulls off the 31st volume; Herbert Hoover isn't much more acceptable today than he was in 1933, when he left office.

And the 30th volume? It has almost nothing in it. Calvin Coolidge had many great virtues, lack of verbosity being chief among them. "The things I don't say," he once said, "never get me into trouble." Presidents never quote that one, and don't remember its wisdom.

Lately Barack Obama, who will be in the National Portrait Gallery, and Mitt Romney, who would dearly like to join him there, have been frequent borrowers, and they've made surprising withdrawals.

Obama has been talking in a positive way about Ronald Reagan, for whom he almost certainly didn't vote, and Romney has been talking brightly about the anti-big-government views of Clinton, though he has bragged that as an independent he chose a Democratic ballot in 1992 to vote against the Arkansas governor in the Massachusetts primary.

Presidents and candidates for the White House often retreat into the library of presidents. They do so to identify themselves with past greatness, to establish themselves as part of an honored tradition, to contrast their mortal opponents with the remarks and values of the immortals. There's been a fair amount of the latter in recent months.

First, Obama suggested that a Republican icon, Ronald Reagan, wouldn't be conservative enough to appeal to the tea partiers in the new, muscular GOP. Then Romney said this month that Obama didn't live up to the Clinton tradition of moderation and bipartisanship.

In an unusual daily double that deprecated two Democratic presidents in one sentence fragment, Romney said that killing Osama bin Laden was such a natural, logical decision that "even Jimmy Carter would have given that order." This was a campaign tour de force.

There never has been predictability in presidential borrowing. Richard Nixon, as partisan a Republican who ever occupied the White House, nonetheless admired Woodrow Wilson, a two-term Democratic president who is one of the new GOP's favorite targets for opprobrium. He also had a soft spot for Hoover, a fellow California Republican who, more than eight decades later, still remains a potent symbol for economic distress and presidential insensitivity. Nixon admired Wilson's sense of internationalism and Hoover's eye for government efficiency.

Clinton in recent years has grown close to his 1992 rival, George H.W. Bush, with whom he engaged in a bitter election struggle, and in his 2008 campaign Obama said he had "enormous sympathy for the foreign policy" of the elder Bush.

The most unlikely pairing might have been Reagan and Kennedy, who shared a taste for showmanship and an affinity for Hollywood but who are aligned in history as advocates for tax cuts.

In truth, Reagan, whose economic convictions were strong, believed in reducing taxes a lot more than did Kennedy, who was an avowed novice in economics and a cheerful but committed conscientious objector to learning more about it. But Reagan used the Kennedy precedent to lure reluctant Democrats into his tax-cut brigade and to give moderate Democrats political cover for supporting his economic ethos.

Presidents and candidates ordinarily embrace icons from their own ideology, which is why George W. Bush patterned himself after William McKinley, who never before or since has been cited as an example of anything for anybody. FDR used Wilson imagery, which was natural because he served as assistant secretary of the Navy in the Wilson administration. Nixon basked in the reflective glory of Dwight D. Eisenhower, for whom he served two uncomfortable, tumultuous terms as vice president.

In office there is little danger in cross-party compliments. Lincoln is a safe lodestar for presidents of both parties and, until recently, so was FDR, whom Reagan supported early in his career when he was a Democrat. Kennedy is a man for all political seasons because his idealism, resolve and sense of national purpose are admired today, even by people who were alive to criticize him as shallow and callow.

But in a campaign setting, these sorts of bipartisan borrowings pose peril.

Not that presidents are beyond diminishing each other. John Adams referred to George Washington as "Old Muttonhead." Andrew Jackson said of John Quincy Adams that he "must be demented." Lincoln called James K. Polk "a bewildered, confounded and miserably perplexed man." And Wilson once called Chester A. Arthur "a nonentity with side whiskers."

To all of which we might add: Takes one to know one.

And this, too, our lesson for this morning: Beware presidents quoting presidents. The lending library is always open, but history belongs to the presidents who write their own volumes, not to those who crib from earlier works.