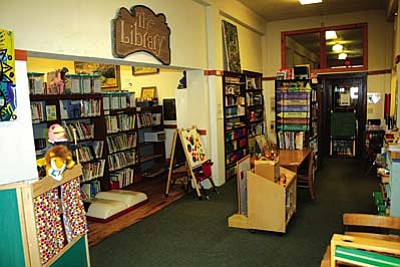 It&#8217;s crowded, but the main room of the Jerome Public Library serves the town very well.

JEROME – It has taken time for this project to become a reality. But, as anyone familiar with that indomitable volunteer spirit that lives in Jerome knows, or as anyone who has watched over the years as Librarian Kathleen Jarvis tenaciously completes one project after another can tell you – if you don’t start it you can’t finish it.

“I’m an idea person,” Jarvis said. “Sometimes it takes years to make it happen. A lot of times it’s just waiting for the right people to show up.

“I had the idea of saving the old books when I first became the librarian in 2003,” she said. “It’s a long story that involves a lot of people.”

During her years of working at the library, Jarvis has tended to the old books with care, always thinking ahead to the day when those old books would once again be placed on shelves and read by the libraries visitors.

“I have personally moved the 4,000 volumes of old books four times,” she said. “But there were a lot of people who helped me, not only move them but make decisions about which books should and could be saved.

“Every time the collection got moved, more and more books literally fell to pieces in our hands.”

Now those old books have a new room of their own on the third floor of the old Clark Street School – now serving as the Jerome Civic Center at 600 Clark St.

Included in the collection are first-edition books, literary novels, resource books, history books and just about every other kind of book one could imagine.

“I think it’s wonderful,” said Rosemarie Shemaitis, deputy town clerk and properties manager. “It’s going back into history. Some of the books go back to when Jerome was incorporated.”

Shemaitis said the new room will be a great place to enjoy the old books. “She’s been keeping all of these treasures,” Shemaitis said, “and now she’s going to be able to share them.”

According to Shemaitis, Jarvis does an amazing job of juggling all of the work at the library and all of her special projects. “She’s keeping us up on all of the new technology and also grounded in the past.”

The idea of an old book room in the Civic Center may have taken a long time to come about, but once the timing was right, it happened rather quickly.

“We pulled this room together in the last 30 days,” Jarvis said on May 31. “All of the work here has been done by volunteers and community service.”

The library will hold off a bit on scheduling an official grand opening of the new Old Book Room. “We’re doing sort of a soft opening June 12,” Jarvis said.

She explained that the soft opening will help them figure out what is needed as far as rules for the old book room will be.

“When we have public using the room, we’ll have better idea of what is needed for use rules,” Jarvis said. “One thing we agree on is that the books will not leave the room.”

According to a Spring 2005 edition of the The Jerome Chronicle, published by the Jerome Historical Society, the Jerome Library was founded in 1893. The story says the library was sponsored by the Women’s Club and it was located in the Hampton House, a local boarding house.

The library was the first occupant to move into the renovated Clark Street School in April 2004. That move was made possible through a $340,000 Community Development Block Grant to restore the old school into the town’s Civic Center.

The Sanborn Maps in the library show that the site was a wooden structure grade school in 1898. It was still showing as a wooden school building in the 1910 and 1917 maps. But the building burned down in 1924. The Sanborn Maps for the era 1924 to 1938 show the school had been rebuilt as a concrete structure.

The school had been closed in 1953 after the Clarkdale and Jerome school districts consolidated. After that, the three-story building was used as a restaurant, discotheque and retail shops. But most of the building has remained authentic.

Jarvis started working as librarian in Feb. 2003, while the library was still in the basement of the Jerome Historical Society’s Mine Museum. Once the renovation on the Clark Street School got far enough along, the library moved in.

Jarvis said the old books all made the move also, but instead of being shelved in the new library, they were put into the old walk-in refrigerator of the old school.

“I was concerned about the condition of the old books that had been stored for years in the bomb shelter,” Jarvis said.

“I had a dream, an idea, a plan to be able to house the old book collection in a space the public could access with natural light, comfortable chairs, tables and lamps, a place where you would want to spend some time,” Jarvis said.

It was in the spring of 2011, according to Jarvis, that Town Manager Candace Gallagher gave the library permission to use the third floor classroom. The room still contained black boards and wood floors and five, eight-foot-tall windows with a view of the Verde Valley and the San Francisco Peaks.

With more than 4,000 volumes in boxes, the project of cataloging all of the books fell to volunteer Kate Roberge, working with a typical Jerome budget line item of zero.

Roberge says she started the project in late November 2010.

“The Jerome Public Library Old Book Room that I first knew was a long, dark storeroom that was about 12 feet wide and maybe 36 feet long,” Roberge said. “I brought my clip on lamp and fan, along with a power strip and my laptop computer, to sit in an old child’s wooden desk and excavate through decades of retired books.”

She said the double-stacked shelves held wonderful treasures from the late 1800s through the 1970s.

“One of the fun things about this project was scanning the check-out cards to see what I had read and to remember the other patrons who enjoyed the same titles,” Roberge explained.

For Jarvis, it all comes down to one simple fact.

“People love old books,” she said. “The fact that the library has taken on the project of making the old books available again is wonderful.”