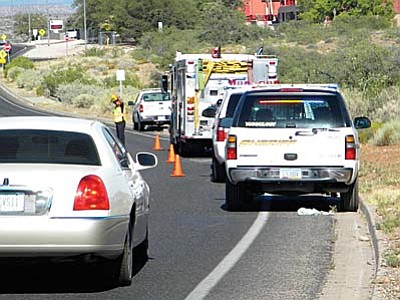 COTTONWOOD -- Kids playing with fireworks were responsible for fire in a wash on property owned by Mingus Union High School west of Camino Real and south of Fir Tuesday. The school property is within the city limits.

Interim Fire Chief Mike Kuykendall said firefighters hosing down the small fire found evidence of fireworks in the thick brush and two kids were chased running from the fire, reported by a motorist. The kids escaped capture.

Reportedly, a U.S. Marshal was in the area trying to serve a warrant when he saw the smoke and activity and tried to chase down the children.

Kuykendall said the fire burned about 50-square feet and could have been a threat to surrounding property owners had it spread.

Fireworks are prohibited inside the City of Cottonwood, and are currently also banned throughout Yavapai County during the tinder dry period.