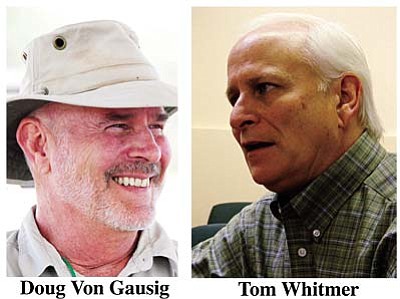 Lloyd Barnett is stepping down from the technical committee and the vacancy needs to be filled by another Verde Valley candidate since there are three TAC members from each side of Mingus Mountain.

Cottonwood Mayor Diane Joens told her council June 5 that she was concerned Clarkdale Mayor Doug Von Gausig is opposing the appointment of Tom Whitmer as the new member of the committee.

Whitmer is one of three candidates being considered by the remaining TAC members for a recommendation. He works for the City of Cottonwood as the Natural Resources Director. He formerly worked for the Department of Water Resources as the Manager for Statewide Rural Water Resources Planning.

The TAC will meet behind closed doors to consider a recommendation, which will be passed on to the full Water Advisory Committee to make a final decision.

Von Gausig said he is concerned that people employed by a WAC member could not be fully objective.

"It has nothing to do with Tom Whitmer. I think he is very qualified, experienced and smart. But, what I have seen is when the technical advisors for the WAC also work for board members of the WAC, their technical advise is sometimes to their loyalty to their WAC members. It is a problem with trying to maintain an objective position. It is very difficult to work for a WAC member and give that member objective scientific opinion when they know there may be a political reason to espouse a particular position. I am absolutely not against Tom Whitmer. If Clarkdale, Sedona or another member tried to do this, I would be against it, philosophically, too."

"All of the TAC members from the other side of the mountain are employees of their towns. John Munderloh of Prescott Valley, Leslie Graser of Prescott and Ron Gritman of Chino Valley all work for the communities," Von Gausig continued

Von Gausig said it doesn't mean they make improper decisions. "But, it politicizes the process. It is easy to see the results of that with the way the WAC has operated since three technical members work for WAC community members. We've gotten gridlock. We can't even run that model that we have paid for because the TAC members are all aligned with the members of WAC from the Prescott side."