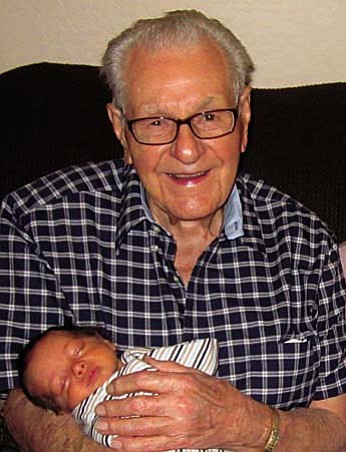 Joseph Robert Masters, 87, of Cottonwood died Friday June 22, 2012 at his home. He was born April 18, 1925 in Watchorn, Oklahoma, the son of James Wesley Masters and Marjorie Masters.

Mr. Masters served in both the Army and the Navy. He received a certificate of appreciation from the French Embassy for being part of the Allied landing on Normanday serving with the 413th Air Service Group. He as awarded the European-African Middle Eastern Campaign ribbon. He later served the Navy until his discharge in 1954.

He worked for the government for 33 years and then worked for Raytheon for about 10 years.

Mr. Masters was a member o f the First Southern Baptist Church in Cottonwood. He enjoyed his nine grandchildren and spending time with his church family.

The family is praising God that he is in Heaven worshipping at the feet of Jesus, the Eternal Son of God.

Services will be held Saturday, June 30 at the First Southern Baptist Church at 10:30 AM.

Donations in his memory may be made to the Jennifer Masters Mission Fund and sent to the Brentwood Neighborhood Church, 50 Birch St., Brentwood, CA 94513.