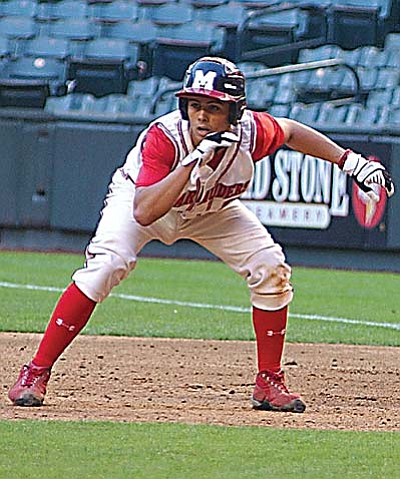 ARIZONA - Ever since Shaun McCarty won the 2012 Rawlings Gold Glove award, his phone has been blowing up. University coaches from across the country were giving him offers to play ball.

In 41 games at shortstop for the Paradise Valley Pumas last season, McCarty posted a .975 fielding percentage with 71 put outs and 123 assists. He did it all with an injured glove wrist.

Maroon and gold will be the colors of his jersey next season, but he'll be playing in the Sunshine State, not the Valley of the Sun.

"Since he was nine years old, when I asked him what his goal was, he said, 'Dad, I want to play Division 1 baseball someday and I don't want my parents to pay for any of my college.' Shaun's goal remained true. He's going to end up playing Division 1 in Florida on a full-ride offer," said Tom McCarty. "He turned down probably 20 or 30 offers from colleges across the country. He finally found Bethune-Cookman out of Daytona Beach, so he loves the location, and they play all the tough Florida schools. Miami, Florida, Florida St."

Bethune-Cookman plays in the Mid-Eastern Athletic Conference, a 12-team league of historically black colleges. The BCU Wildcats baseball team wins the MEAC nearly every year to earn an automatic bid into the NCAA postseason tournament.

They play in Jackie Robinson Ballpark, an almost 100-year old field on an island in a channel.

"I'm really excited. The past month has been college after college calling me each day, and I loved the entire experience," said Shaun. "Bethune-Cookman has great weather in a great location--it's the second best thing to being in Arizona for me. I'd rather stay here because it's close to my family, but I really like what BCU has to offer. The field is sick, they're D-1, they have sunny weather, and the scholarship they offered me is great--those are all the factors that led to my decision."

"My main thing is I want a degree, but I also want to get drafted after I graduate. I've always wanted to prove that a kid from a small town can make it big--I love hearing stories about that," said McCarty. "Also, my parents have given me great support, and I've always wanted to make them proud."

Baseball is like a religion in the McCarty house. Shaun McCarty is a great athlete, but he's a great baseball player because of an inherited love for the game.

Playing at Paradise Valley College under Victor Solis turned out to be a great fit for Shaun.

"My Paradise Valley experience is what got me the gold glove," said Shaun. "We worked hard in practice. It was all business. That's how coach Solis operates. He's all about getting the job done."

Tom McCarty said Solis is one of the best middle-infielding coaches in the Southwest.

"Victor Solis took Shaun to another level and he made him mentally tough--he challenged him. At times Shaun would be kind of upset with his coach, but he challenged him in ways that just made Shaun prove to his coach that he could do it, and he was the man," said Tom.

Shaun has been the man since his sophomore year at Mingus High School. He was part of two state championship teams his sophomore and junior years. In his senior year he was the vocal leader at shortstop, a winning fastball pitcher with a low ERA, and a consistent hitter. He won MVP at the 2010 Arizona high school all-star game and garnered offers from several colleges, but he had already signed with Paradise Valley.

Against better pitchers in the Arizona Community College Athletic Conference with a wood bat in his hands, Shaun's batting average was .215 over two seasons. He knows he can improve at the plate, but McCarty's defensive stats overshadow his hitting stats.

No doubt, getting his wrist back to 100 percent will help his average. Shaun underwent surgery to clean up some cartilage and his dad said the operation went perfectly.

You can't measure toughness, but if you could, putting together a Gold Glove season in a considerable amount of pain would rank pretty high on the gutsiness scale.

He could have gone a lot of places, but Shaun decided to take his toughness to Daytona Beach where he'll be the shortstop for a D-1 program with a winning reputation.

"The hardest part about this decision is leaving my family. My dad has been my coach ever since little league and he's been at all my games, so has my mom. My grandparents also came to a lot of my games," said McCarty. "It's the only drawback of the situation I can find. Everything else is pretty sweet."

"I've always wanted to prove that a kid from a small town can make it big--I love hearing stories about that."