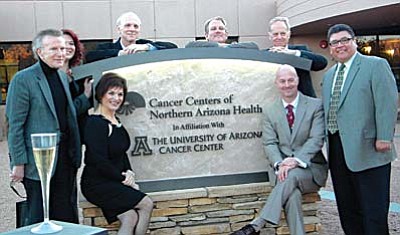 The leadership of the Verde Valley Medical Center and of University of Arizona Cancer Center pose before the new monument sign which recognizes the affiliation. VVN/Jon Hutchinson

SEDONA -- To the applause and toasts of of supporters, benefactors and physicians, the Verde Valley Medical Center and the Cancer Centers of the Northern Arizona made two important announcements here Friday. Officials unveiled the more powerful equipment and features for the Sedona Cancer Center and took a significant step by signing an affiliation agreement with the University of Arizona Cancer Centers

Sandoval said Birch talked of his dream to providing medical facilities and emergency services in Sedona with state-of-the-art equipment. Birch predicted that people will travel to Sedona to be treated instead of leaving Sedona for health care. Sandoval declared, "Si's dream has become a reality."

In the past, a person may be scheduled for six to seven weeks of daily treatment. With the new linear accelerator, that time is now down to only a single week. It is the only such equipment available in Northern Arizona.

Verde Valley Medical Center Radiation Therapist Dr. Neil Hanson showed off the new Varian Linear Accelerator that he described as "much more progressive, user-friendly equipment, with a greater image capacity and a tighter field of treatment in order to treat the isocenter of the cancer and spare healthy tissues."

Dr. James Bleicher, President and CEO of VVMC, told the crowd he was tasked with establishing an affiliation with a nationally-accredited comprehensive cancer care center to provide outreach, surveillance and treatment of the population. It was a year-long process to work through the details. But that affiliation was found in Sedona's back yard.

Dr. David Alberts, Director of the University of Arizona Cancer Center, has a home in Sedona, not far from the CCNAH-Sedona center.

He said when he first built the home 12 years ago, he told his wife he wanted to build a cancer center in Sedona. That hasn't happened, but his institution is now able to work with one.

The UofA affiliation is the only one like it in Central and Northern Arizona.

Through the affiliation, CCNAH-Sedona patients will have access to leading-edge research trials as well as expertise of the UACC's nationally and internationally renowned physician and scientist members.

"We chose to affiliate with Verde Valley Medical Center and the Cancer Centers of Northern Arizona Healthcare because of the high quality of care they provide and their commitment to being on the cutting edge of cancer treatment," Alberts said.