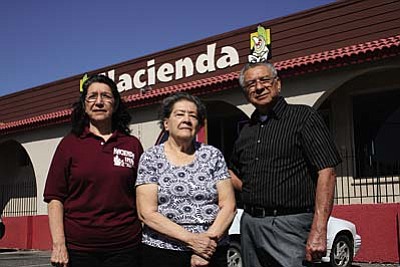 VVN/Philip Wright<br /><br /><!-- 1upcrlf2 -->The Hacienda Inn in Cottonwood will celebrate its 40th anniversary March 13. Vera Varela, center, is owner, and she operates the business with sister Rosie Lee and brother Tony Ortiz

COTTONWOOD – “We opened March 13, 1972,” said Vera Varela, owner of the Hacienda Inn Mexican restaurant at 1330 E. SR 89A in Cottonwood. The restaurant has been in continuous operation at the same location for 40 years.

Vera opened the business with her husband, Marcelino.

“He learned to cook,” Vera said. He came in each morning at 5 a.m. to make enchilada sauce and other staples before driving to Belmont, west of Flagstaff, to work.

Vera’s sister Rosie Lee is manager, and her brother, Tony Ortiz takes care of maintenance and projects. In fact, Tony is currently in the middle of expanding the dining room and remodeling the entrance.

The Hacienda has always been a family affair. Vera’s four daughters all worked at the restaurant at one time or another. Her three sons also helped out at times.

Vera said everybody has worked at the restaurant, children, grandchildren, nieces and nephews. “Right now, we’ve got two of my grandkids working here,” she said.

“This is the only restaurant I’ve ever owned,” Vera said. “I hope I don’t own another one.”

Vera did try to retire a few years ago and thought she had the business sold. But within three years, she had to take the restaurant back and run it again herself.

The Hacienda has always served Mexican food. Rosie said they are serving the same food now as when the restaurant opened.

“We added a hamburger, shrimp dinner and a steak and enchilada dinner,” Rosie said. “Our biggest seller is probably our Mexican pizza.”

At one point, the kitchen was enlarged, and another dining room was added in 1980, Rosie explained. “Other than that, nothing was changed.”

She said the main dining room is original.

Vera has a waitress, Bea, and a dishwasher, Genoveva, who have both been with her for 28 years. One cook has worked for the restaurant for 15 years.

The Hacienda does not offer offsite catering, but on occasion the staff is asked to prepare large amounts of food for special events. But the customers come to the restaurant to pick up the food. Rosie said the largest group the restaurant has cooked for was 400 people.

To commemorate the 40th anniversary, the Hacienda will have special music, along with drawings and giveaways on March 16 and 17. The music will be featured both days from 5 p.m. to close.

The Hacienda Inn is open Tuesday through Saturday. Current winter hours are from 11 a.m. to 8 p.m. But the restaurant is always open until 9 p.m. every Friday. Summer hours will be from 11 a.m. to 9 p.m.

“I want to express our deepest gratitude to the community for the support they have given us over the years,” said Rosie.