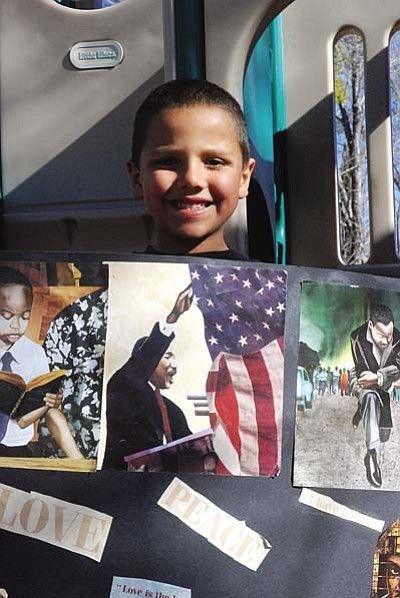 Chandler Plante is the 2012 Verde Pride Student of the Year

First grade might seem very young for a child to be selected as Student of the Year for the Verde Valley Pride Awards 2012. But this year’s winner in that category is not a typical first grader.

Chandler Plante is a first-grade student at Camp Verde Elementary School. He is also Student of the Year for this year’s Verde Pride Awards.

All of the attention came when 6-year-old Chandler organized a march in Camp Verde for Martin Luther King Jr. Day. He obtained more than 60 signatures to get permission from the town council to hold the march.

He then recruited children and teachers from his school, dancers from the Yavapai-Apache Nation and kids from his brother’s Tae Kwon Do class to join the march.

Chandler is the son of Janice and Robert Plante of Camp Verde. He has three older brothers and one younger sister. It was his brother Chris Zellner, a senior at Camp Verde High School, who wrote the official nomination letter for Chandler.

“My little brother Chandler is young but awesome,” Chris stated. He explained that Chandler volunteers weekly serving food at the Bread of Life program. He also helped organize a canned food drive, and he took a big get-well card around town getting signatures and sent the card to Congresswoman Gabrielle Giffords.

“My little brother is small and only in first grade, but he should receive an award because he cares about others and has done a lot to make the community and school a better environment,” Chris stated. “Chandler cares about others’ feelings and thinks of ways to bring people together, even if he doesn’t know them.”

Chris said that Chandler read a biography of Abraham Lincoln at a very early age and developed a lasting interest in presidents and history.

Chandler’s mother Janice explained to Camp Verde Bugle Newspaper reporter Steve Ayers that Chandler wanted to know why there was no Martin Luther King Day march in Camp Verde. When she and her husband, Robert, had to admit they didn’t know, Chandler insisted they get one started.

In Ayers’ story about Chandler and the march on Jan. 16, Chandler tells in his own words why Martin Luther King Jr. is his hero.

And more than a little bit, that is how Chris feels about his younger brother, Chandler.

“He comes up with ways to make people smile and does good things,” Chris said. “He doesn’t let his age set him back. He has goals and makes them happen.”