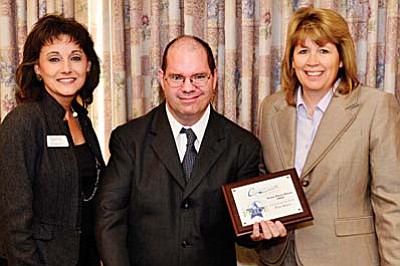 The 2012 Verde Pride Awards ceremony took place on Thursday morning at the Cottonwood Chamber of Commerce breakfast held at the Verde Valley Medical Center in Cottonwood. The Verde Independent newspaper and the Cottonwood Chamber of Commerce co-sponsored the Verde Pride Awards. Verde Independent CEO Pam Miller introduced the recipients and presented them with an honorary plaque. Winners of the award were nominated and voted on by people in the community, and have all made substantial contributions to improving the quality of life in the Verde Valley. The youngest recipient was 6-year-old Chandler Plante who established the first Martin Luther King parade in Camp Verde and was voted Student of the Year. See profiles on all the winners on pages 2-3 of today's Verde Independent. VVN/Jon Pelletier