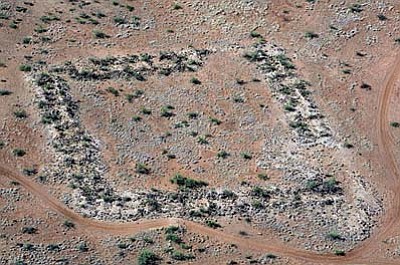 Courtesy of Joe Vogel<br /><br /><!-- 1upcrlf2 -->How long the Wingfield Mesa ruin was occupied and when remains a mystery. Its unique design has baffled archaeologist ever since it was first mentioned in an article written in 1890 by former Fort Verde Surgeon Dr. Edgar Mearns.

CAMP VERDE - In 1927, a pothunter from Phoenix named George Dawson was looting his way through a ruin east of Camp Verde, not far from West Clear Creek, when he uncovered a stone cist.

His past experience, which included an extensive list of excavations in not only Arizona but also Mexico and Central America, had taught him that a stone box likely meant just one thing -- a burial. Judging by the size of the cist, Dawson figured it was that of an infant or small child.

His assumption was reinforced when he removed the lid to find the inner chamber filled with dirt. Knowing that burials were often accompanied by an assortment of finery, he took his time pulling back the loose soil.

About a foot to 18 inches below the lid he found a layer of feathers. Further excavation showed it was an entire blanket of feathers wrapped around what was sure to be a body -- that is until he reached in to pull it out.

Whatever it was, it was heavy -- far heavier than the bones of a human child. Dawson wrestled with the object for some time before successfully lifting it to ground level.

When he pulled back the blanket he could hardly believe his eyes. There before him was a leaf-shaped slab of iron, about two feet long, a foot wide and five inches thick. It was the strangest thing he had ever unearthed.

In time Dawson would come to understand that he had found a 135-pound nickel-iron meteorite, a fragment of the Canyon Diablo Meteorite -- the same one that created Meteor Crater east of Flagstaff.

What it was doing in a stone pueblo in the Verde Valley remains a mystery -- as does the mysterious pueblo itself.