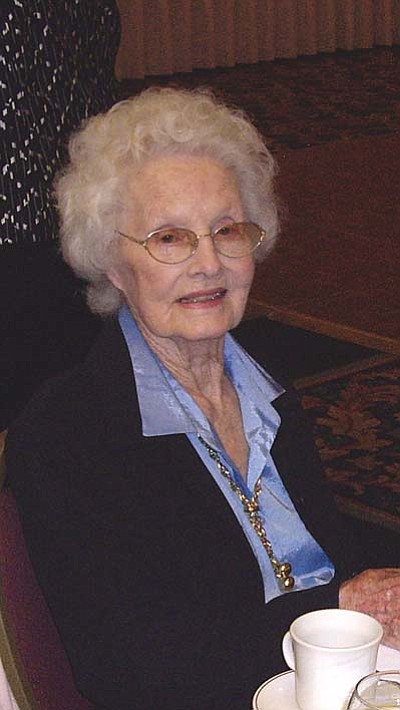 Anna was born in Cedar Glades Arkansas to Fred M.L. Liljenberg and Nancy L. Liljenberg and lived the first years of her life in Arkansas, Cottonwood Arizona and Stuart Oklahoma. The family made several moves back and forth between the differing states and settled in Cottonwood in the area called Smelter City at the time. Anna went to school in Clemenceau and then Clarkdale High School.

Anna met her husband, Donald J. McDonald, in the 9th grade at Clarkdale High School and they were married after high school graduation on June 22, 1936, in Prescott, Arizona. Theirs was a wonderful marriage and they had celebrated their 74th wedding anniversary back on June 22, 2010.

There early life together was in the lumber business and Anna helped her husband manage a small lumberyard in Cottonwood in the 1937 time frame. In 1941 she and Don bought a sawmill near Stoneman Lake and ran this sawmill through World War II and a few years afterwards until 1947. They then moved to Cottonwood and spent the rest of their life there raising their six children and with Don managing the Verde Valley Lumber Co. Anna was a long time member of Eastern Star and was an avid gardener, homemaker and seamstress. She loved to travel and see the world. A vacation trip with family and friends was one of the great activities and pleasures of her life.

Anna had an outstanding sense of humor and great dedication to her husband, her family and the local community. She was a loving, caring person who inspired all those around her, but especially her 6 children. She lived a full and rich life and garnered incredible respect from all who knew her. Most importantly, she was a wonderful mother and wife who will be incredibly missed by all those whose lives she touched – but especially her entire family – children, grandchildren and great grandchildren.

Anna was preceded in death by her beloved husband Don, who passed away September 4, 2010 and is survived by her 6 children (Robert G. McDonald, Walter D. (Don) McDonald, Fred J. McDonald, Richard A. McDonald, Susan C. Brindley, and Cheryl A. Huppert) as well as 18 Grandchildren and 15 Great Grandchildren.

There will be a gathering and viewing at 9:30 followed by an Eastern Star Memorial Service at 10:30 a.m. March 19, 2012, at Westcott Funeral Home, 1013 E. Mingus Ave., Cottonwood, Arizona. Burial will take place at the family plot that afternoon at the Cottonwood Cemetery.