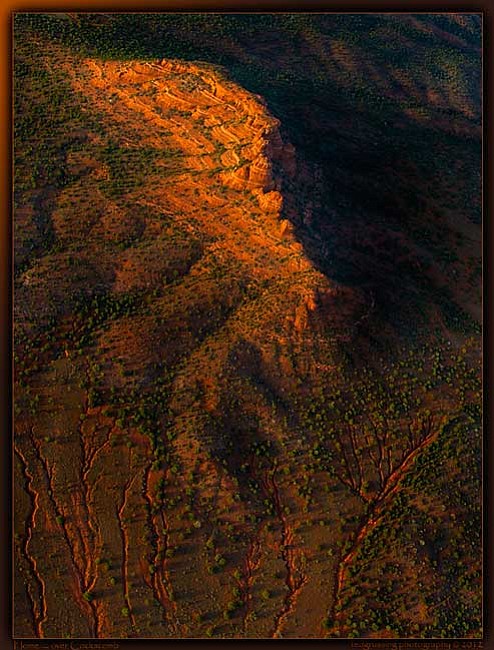 ... a million years this rock formation will have eroded away and indeed most of the red rocks in the Sedona area will also have eroded away, perhaps additional seismic activity will have formed new canyons and alter the landscape; approximately a thousand new volcanoes will have erupted in the Flagstaff/Sedona (San Francisco Volcanic Field http://en.wikipedia.org/wiki/San_Francisco_volcanic_field ) area as the cycle is about 800 to a thousand years and we are about due for another one now. Already there are six hundred inactive volcanoes within a forty mile radius of Sedona and the most recent one was Sunset Crater just north and east of Flagstaff which erupted in about 1065.

Late afternoon we headed into to town to run a few errands and to launch me back into the sky and regain a sense of reality and peace. I didn't really have a destination; just up and off the ground. Did a little work on the ship and launched around six o'clock ... took off and headed straight out climbing to ten thousand feet over Mingus before turning around and returning to Sedona via Sycamore canyon. There was a tremendous amount of pollution in the air so about the only aerial shots that were going to work were those with the sun on my back and shooting nearly straight down. Not sure of the origins of the pollution, perhaps blowing dust from the deserts, fires or? I took this shot of the Cockscomb formation SW of Sedona. The erosion which is ongoing and what has shaped this area is evident below the formation.

So it was a good day, didn't feel like cooking so picked up some deli food from an unnamed deli ... should have just fasted ... smiles.

Enjoy the day, the company of friends, family and coworkers ... we may be short lived creatures but we do choose how our lives play out for the better or not.

Sedona Pathways Our Daily Journey: May 20, 2019
A Violent Past
Soon to waken
Tens
Prepping for next volcanic eruption: Officials gather in Flagstaff to discuss response
Event Calendar