For Cottonwood Lookin' Good competitors, winning is all about losing 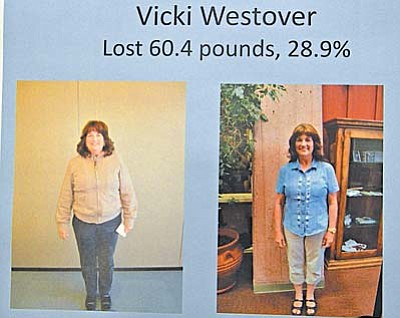 The criteria for the prizes included greatest loss of body mass rather than simple weight loss.

First place winners in men's and women's divisions each won $2,000. The two second-place winners won a check for $500. This year, a $500 group prize was also awarded to the team that lost the most body mass.

Three hundred contestants started the competition, and 100 completed it. More completed than last year according to Kimparens.

Timothy Larkly, a pastor at Faith Baptist Church, lost more weight than his three children's weight combined. "I gave my life back to my children," he said.

One couple, Bruce and Vicki Westover, both entered the competition. She came in first in women, he placed third among men and lost a quarter of their body mass and 127 pounds.