My Turn: Building relationships most important step in process of teaching, learning 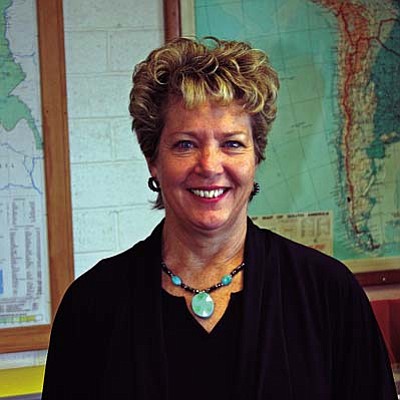 Many years ago at a Thanksgiving gathering one of our guests realized I was a kindergarten teacher. She immediately said “Oh, that’s wonderful! I’ll bet you have lots of great stories about kindergarten! Share one with us!”

I thought for a few minutes and was sorry to realize I couldn’t think of one “cute” or “funny” story to tell. Instead I thought of the time one of my girls during a music assembly started to cry.

I reached down and pulled her up onto my lap and asked her what was wrong. She said, “The last time I heard that song was when I went to the movie with my mother and now she is in jail and I can’t see her anymore!”

I also thought of the girl who left my classroom to live in the streets with her mother and another who came to live with his aunt and came to my classroom never having had a bed of his own -- he had been sleeping on the floor of motel rooms his whole life. For the life of me I could not think of a “great” story to share with her.

I know the idea behind writing this is to talk about why I love teaching, but this was a real “Aha!” moment for me. I realized just how hard life was for some the students in my classroom and that one of the things I loved about teaching was giving them a safe place to be. A place they could be themselves and to grow. A place where they could know what was going to happen each day without fail.

There is nothing better, no matter what grade you’re teaching, than when you see a student learn something new and that light of understanding hit them.

I also remember the day a fellow teacher came to me at wits end about a student. She asked me in frustration what I had done when I worked with him the year before. I thought and thought and couldn’t come up with anything for a while.

Finally I said, “Do you love him yet?” She said, “No, not really,” He was that hard to deal with, but later she told me very excited, “You were right—I DO love him now and he has finally started working for me!”

It is through the relationships we forge with our students that we are able to teach them. It is also the best and most worthwhile thing we take with us at the end of a school year. Many students literally refuse to learn from us until they come to trust us and know we have their best interests at heart. It is what I love most about teaching.

I was with my son one day and was talking to a former student. Later I told him, “That was one of my favorite students.” He said, ”Mom they were all your favorite students.” I think he was right. Some days it seems we do battle every day but I really do love all of my students, each in their own way.

I do have many treasured moments of teaching. I dearly love teaching seventh grade and I love the fact that they understand my sometimes-warped sense of humor and they “get” my jokes.

Kindergarten, first and second grades were great because they were still so excited to learn and almost always loved their teachers, at least eventually. My first year of teaching was sixth grade and was very special to me also. I remember all of them but sometimes don’t come up with their names right away anymore. They change so much!

It bothered me a lot when I first taught seventh grade because after two or three years I couldn’t always remember my former student’s names and then I realized that when I taught at Oak Creek, I saw them pretty much from kindergarten to eighth grade and only had 20 to 25 students at a time.

In seventh grade, I have 110 to 130 students a year. I love nothing better than when a former student comes over to tell me that they remember me, and a lesson we did together in class.

I do have one story to share from kindergarten. We had a speaker on bees in our classroom. He brought in pictures and was explaining the roles of the bees in the hive.

He said the queen’s role was to produce the eggs, the workers were all female and the male’s only role was to mate with the queen. During the winter, when food was getting scarce the workers would take those males to the edge of the hive and throw them out! Anna Hammerle was in the back madly waving her hand and when she was called on she said, “That’s just like my dad and my brother!” I nearly broke my neck getting to the classrooms of Marie and Rob to tell them what she said!

The best times for me in teaching were not in the classroom at all, however. The best times for learning were on field trips and during our Hands Across the Border exchanges with Caborca, Sonora, Mexico. When you take a group of students on a trip you see them in a whole different light, and they see you as a different person too.

Even on a trip to Montezuma’s Well recently I realized that going through a tough time, even if it’s just a hot bus ride or hike, brings us all together in a whole different way.

Taking a trip to a foreign country and not knowing the language and culture brings you together even more! Those trips will always be my most treasured times in teaching. I know it changed my student’s lives to be involved in this program and it changed mine too, definitely for the better!

Rhonda Gonzalez is a seventh-grade teacher at Cottonwood Middle School.