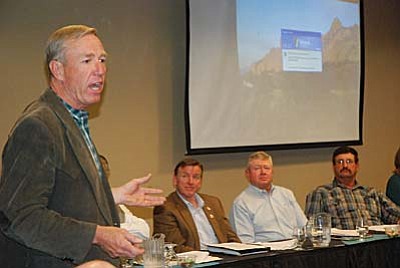 District 2 Supervisor Tom Thurman was among the regional leaders and members of the Arizona Cattle Growers Association who attended a question and answer session in Camp Verde discussing the proposed “ Catastrophic Wildfire Protection Act of 2012. VVN/Steve Ayers

CAMP VERDE -- U. S. Congressman Paul Gosar is fixing to introduce one of the most sweeping pieces of legislation to address management of public lands in years.

Entitled the Catastrophic Wildfire Protection Act of 2012, it would allow for the designation of "at-risk forest" lands, on which federal land managers would be required to implement "wildfire prevention projects."

Those projects would sidestep many of the regulatory steps currently required under the National Environmental Protection Act and the Endangered Species Act, and allow logging and grazing as a means of reducing fuel loads.

The law is a direct response to Arizona's Wallow and Rodeo-Chediski and New Mexico's Las Conches fires that have burned hundreds of thousands of acres and the growing disenchantment with the federal government's response to prevent future fires.

According to Gosar, the bill has 18 co-sponsors and will be introduced next week.

It affects only lands managed by the Forest Service and the Bureau of Land Management.

At a meeting of regional leaders and members of the Arizona Cattle Growers Association in Camp Verde on Tuesday, Gosar admitted the proposed law will have a tough road through Congress.

"This isn't going to be easy. It's going to take all of us, keeping our eyes on the prize," said Gosar.

The legislation is, in part, in response to the Save Arizona's Forest Environment plan initiated late last year by Arizona's cattlemen.

The SAFE plan called for immediate restoration of Arizona's overgrown forests, a five-year suspension of NEPA regulations, reintroduction of logging and grazing in areas closed off because of endangered species concerns and a review of wildfire fighting methods used on public lands.

"This legislation addresses the concerns of the SAFE plan. We are being proactive and offering a solution to fix the problem. None of us wants to see another catastrophic wildfire," said ACGA President Andy Groseta.

Upon receipt of a "public petition" for designation of an "at-risk forest" or "threatened and endangered species habitat," the bill would require the secretary of the agency affected to make a decision within 60 days.

If the project is authorized, the public would have 30 days to respond to the decision after notice is published in the Federal Register. And within 60 days of that same notice a final notice of the project would have to be published.

If the project included logging or grazing, an environmental impact statement would need to be prepared within 30 days. The EIS would be good for 10 years for grazing and 20 years for logging.

The final section of the proposed legislation would require and assessment of potential fuel loads before listing of any species under the Endangered Species Act.

Regional leaders lent their support to legislation as well as the notion that something has to be done to remove the potential for more large fires.

"Environmental impact statements have gotten where they are completely out of hand. Even when we try to work on trails, it's like pulling teeth. The forest is way too thick. This makes complete common sense," said Thurman.

Camp Verde Mayor Bob Burnside, whose council endorsed the SAFE plan early this year, said such legislation would be welcomed.

"It will help preserve our backyards and our beyonds," said Burnside.