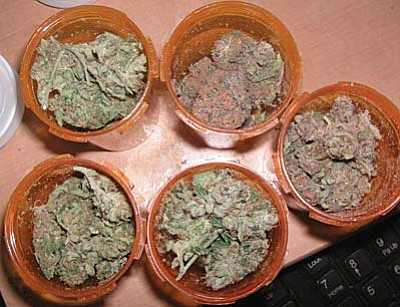 PHOENIX -- Arizonans who say they suffer from post-traumatic stress disorder are hoping to get the same medical options as those with glaucoma or seizures: the right to use marijuana for medical purposes.

Petitions have been filed asking state Health Director Will Humble to add PTSD to the list of medical conditions that voters approved two years ago for medical marijuana. Humble will conduct a hearing later this month and likely issue a ruling in August.

PTSD sufferers are not the only ones hoping to add marijuana to the list of conditions that can be treated with marijuana. Other petitions are seeking to make the drug an option to treat migraines, depression and general anxiety disorder.

But proponents could have an uphill fight.

Humble noted that some of the petitions contain first-person reports of how their conditions were improved with the illegal use of the drug. Others have various news and magazine articles attached.

What are in short supply, though, are full-blown double-blind peer-reviewed laboratory studies. And Humble told Capitol Media Services that, without these, he is powerless to expand the legal uses of marijuana.

The 2010 voter-approved initiative lists specific conditions that can be treated with marijuana, ranging from glaucoma and AIDS to chronic or debilitating conditions that lead to severe and chronic pain, severe nausea, seizures, or severe and persistent muscle spasms.

Would-be users must first get such a diagnosis from a doctor along with a recommendation that the drug would help. That allows the patient to get a state-issued card allow them to obtain up to 2 1/2 ounces of marijuana every two weeks.

There also are procedures to license about 125 dispensaries where medical marijuana cardholders can legally obtain the drug.

But the measure also entitles anyone to ask the health director to add to that list.

Some of the petitions are quite personal.

One person -- names of patients have been deleted from the copies made public -- details suffering from migraines since childhood.

"In years past, I have been a guinea pig for many migraine medications that did not help,' wrote the woman, saying one lasted for three weeks.

"I could barely see, had no balance or coordination the entire time, could not mother my child, or function at all in the light,' she wrote. She then detailed how she has self-medicating with marijuana and how the drug "stops the migraine in its tracks.'

Another was from someone who spent more than four years on active duty including overseas combat before being medically separated. A diagnosis of PTSD, the writer said, led to various prescriptions including morphine and Percocet.

Self-prescriptions of marijuana, the person wrote, resulted in no need for 12 medications prescribed by the Veterans Administration.

Humble said all this information is helpful. And he said those with personal stories can show up at a hearing on May 25.

And what of anecdotal evidence?

"In the gradient of medical weight of evidence, that's sort of at the bottom,' Humble said.

"It's still meaningful information,' he continued. "But in the spectrum of science, it's not up there with a peer-reviewed, double-blind, placebo type of study ... that ends up being published in the Journal of the American Medical Association or the New England Journal of Medicine.'

Humble conceded there does not appear to be a lot out there -- especially the kind of studies that make it into those two renowned medical periodicals.

Some of that may be because the federal government still list marijuana as a Schedule 1 drug, meaning there is no known medical use for it. And the U.S. Drug Enforcement Administration has not been generous in providing the necessary federal permits for research facilities to grow the drug to conduct the experiments.

So Humble is willing to look elsewhere, noting there has been some research in Israel.

"But it needs to be good science,' he said. And Humble said some of those looking to add PTSD to the list of permitted uses of marijuana submitted copies of some studies.

But those, by themselves, won't do.

"I want to make sure that we're doing our homework and we're not missing studies that are out there that might suggest that it does harm,' Humble said. "In other words, it's not fair to pick and choose what looks to be a promising treatment if there are other studies out there that show it could actually do some harm.'

To that end, Humble said he has contracted with the University of Arizona College of Public Health to review the medical evidence, both what is submitted by petitioners and what is not.

"They're not going to make the decision for us,' he said. "But they're going to make sure we're not missing something as we go through this process.'

And there's another reason Humble said he wants to see all the evidence: He does not want to approve marijuana for a medical condition and have people think it's a "first and a proven strategy' for dealing with the problem.

"They may bypass more contemporary and proven treatments,' he said.

Humble said that could happen with limited information.

He said he was at a conference earlier this year in Tucson where someone claimed that application of marijuana oil topically helped to cure certain types of skin cancer. Aside from the fact that the study was not done scientifically, compete with placebos, Humble worried that someone might choose to go that route rather than pursuing more traditional -- and medically successful -- treatments.

Humble said he expects a final decision in August. But that is not the last word: Anyone dissatisfied with his ruling can appeal to Maricopa County Superior Court.

One interesting side note, Humble said, is that at least one of the petitions may be legally unnecessary.

Humble noted that existing law already allows doctors to recommend marijuana for any chronic medical condition that causes "severe and chronic pain,' something that may include migraines. In fact, he said, that condition is so broad that more than 88 percent of the more than 25,000 applications for the use of medical marijuana cite severe and chronic pain as at least one of the medical conditions entitling someone to use it.

The Department of Health Services is having a hearing on May 25 on whether to add certain conditions to those which can be treated with marijuana. The hearing with be at the agency's auditorium in the laboratory building at 250 N. 17th Avenue in Phoenix. PTSD will be the subject of the first session from 1 to 2:30 p.m., with the 2:30 to 4 p.m. session on depression, migraines and general anxiety disorder.