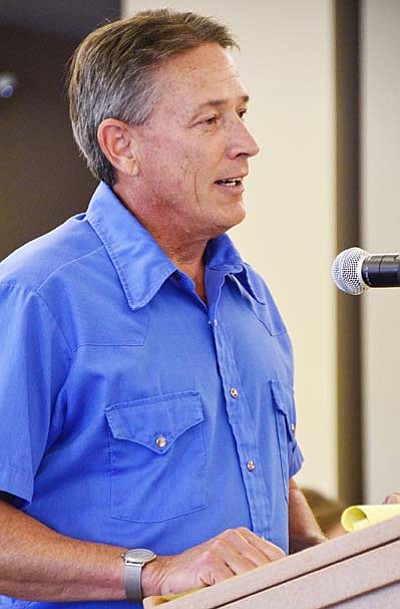 County Supervisor Chip Davis describes himself as a difficult student and a class clown who &#8220;always had something extra to say.&#8221; Nevertheless, there was one teacher he connected with and remained friends with way past his school years.

County Supervisor Chip Davis will be the first person to tell you he was a “difficult” student. He was, in his words, an irrepressible “class clown.”

“Some things come naturally as you can well imagine,” says Davis. “My kids grew up thinking I was the valedictorian and was a model student until they found a box of evidence one day that proved otherwise.”

Like so many kids of his generation growing up in Arizona, the important things in his life took place outside the classroom.

“School was so much different then. You learned so much more riding your bike or hiking in the mountains. We didn’t have video games so outdoor activities were where I learned a lot. The classroom was a prison to be avoided.”

Davis admits that most of his early education came at home where he learned his lessons from games played with his mom and his two sisters.

“I think most of the lessons you retain come by age 5. When I grew up we played a lot of games. My mom taught us to think fast with flash cards and other games where you had to be quick.

“She grilled us every day, but it was fun to us. She made it enjoyable to challenge your mind. It’s where I got my math skills early on.”

But Davis says, there was one teacher, Mr. Mahan, his fifth grade teacher at Thomas School in Flagstaff, who in one way or another got through to him.

“He was my homeroom teacher and my flag football coach. What made him special was he was young. He talked about hunting and being outdoors and going to places little boys wanted to go.

“He was encouraging in that sense and made class fun. But sometimes it was too much fun and I got out of hand. To me it was always more fun to crack a joke than it was to behave. It seems I always had something extra to say.

Davis says that in spite of Mr. Mahan’s corporal approach to class discipline, he is no worse for having had the experience.

“He was good at putting us back in line. I was difficult and I think I got spanked every day I was in his class. Now days a teacher couldn’t get away with that, but I never had hard feelings toward him. In fact we stayed friends until I was almost 30 years old.”