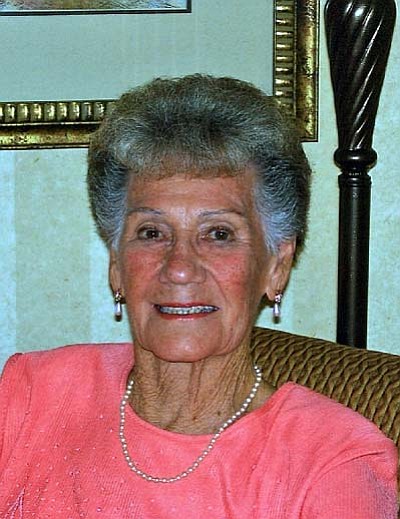 Adele was raised on a farm in Somerton, Arizona, graduated from Yuma Union High School where she enjoyed her role as lead majorette. She met her husband while attending nursing college at Mercy Hospital In San Diego, California. Adele worked as a dedicated surgical nurse for many years at Marcus J. Lawrence Memorial Hospital (currently Verde Valley Medical Center) when the family moved to Cottonwood in 1959. She continued her service to the area by working as secretary to the Superintendent of Cottonwood Oak-Creek School District, campus secretary at Cottonwood Elementary and Cottonwood Middle School, and school nurse for several of the district’s campuses.

Adele was active in the Elks Lodge, Moose Lodge, Dollars for Scholars, Special Olympics, PTA President, the Catholic Parish Council and a member of the Immaculate Conception Church. She was an avid quilter and often donated her works to local raffles for fundraisers. She enjoyed her family, camping and having fun. Adele opened her home to foster children and dozens of teenagers and young adults needing stability in their lives.

Adele loved her family and shared her life with hundreds of friends celebrating their triumphs and supporting their challenges. She drove kids to athletic events, helped with fundraisers, and cooked and fed more than half the residents of Verde Valley. Adele was known for her stories and long walks with her walker around the community in her later years. She never met a stranger.

Adele enriched the lives of those whose path she crossed . . . “Mrs. O.” and “Gramma O”., as she was also affectionately known, will be deeply missed and always remembered for her generosity and kindness.

A visitation will be held on Thursday, May 17, 2012 at Westcott Funeral Home in Cottonwood from 5:00 – 7:00pm with a rosary at 6:00pm. A Funeral Mass will be held on Friday, May 18, 2012 at Immaculate Conception Catholic Church at 11:30am. Interment will take place in Valley View Cemetery.

In lieu of flowers, the family requests you consider donations to the Immaculate Conception Church or Mingus Union High School athletic programs.