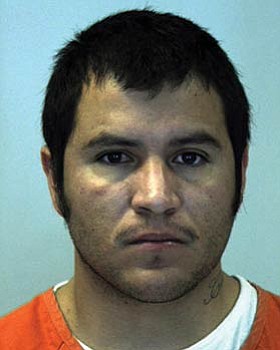 PRESCOTT - An attorney in the Cesar Garcia-Soto death-penalty murder trial has filed a motion asking that Yavapai County Superior Court Judge CelÃ© Hancock be removed from the case because, he claims, she has violated ethical rules.

Garcia-Soto, now 30, of the Village of Oak Creek, was arrested in February 2008 and charged with first- and second-degree murder and two counts of child abuse in connection with the death of his 3-month-old son.

The couple's other two young children were placed in the custody of Child Protective Services.

Rodriguez-Paz pleaded guilty to one count of child abuse in 2008 and was sentenced to a year in prison.

Michael Terribile, an attorney for Garcia-Soto, alleges that Hancock communicated with a non-party to the case regarding a pending issue, disclosed confidential reports regarding the defendant's I.Q., and threatened to file a bar complaint against Garcia-Soto's lead attorney, John Napper, all of which are evidence of "bias and prejudice against the defendant," he wrote.

Napper has been arguing that, because this is a death penalty case, he is obligated to undertake "an exhaustive investigation into the history and life of Mr. Garcia-Soto," but the fact that Garcia-Soto is a citizen of Mexico means that would have to take place in Mexico, and "the United States State Department has issued a warning asking all American citizens not to travel to that portion of Mexico (Cuidad Juarez in Chihuahua)."

He had first asked that Judge Hancock dismiss the death penalty, but when she denied that motion, he then asked that he and his co-counsel, Phoenix attorney Dennis Jones, be allowed to withdraw as counsel for Garcia-Soto.

Hancock denied that motion as well; she said that there was evidence available to Napper and Jones that could be used in mitigation, specifically mental health evaluations; these, she said, "include information on the defendant's upbringing in Mexico."

Terribile argued that her "reference to and reliance on the contents of (those two mental evaluations) was highly improper," because they were sealed and, he asserted, were intended to be "available only to the defendant."

Hancock, in an earlier hearing, referred to Napper's complaint that he could not, in good conscience, send investigators to Cuidad Juarez, saying, "I have done a lot of research on this on my own. This is not an isolated issue. It is occurring in Phoenix as well.

"It is my understanding that there are individuals who will travel to these areas to gather mitigation and there are attorneys who don't seem to have a problem (hiring them)," she said, referring to information she gained in a phone call she had placed to the Director of Public Defense Services for Maricopa County.

Terribile called that an "unauthorized" conversation, and cited an ethical rule which he said prohibits a judge from "considering other communications made to the judge outside the presence of the parties."

He also took issue with the fact that, after Napper had said in court that he would not take part in the mitigation phase of the trial if his client was found guilty, calling it a "farce," Hancock said that if he refused to do so, "the court is duty-bound to report such action to the State Bar of Arizona."

Terribile characterized that as a "threat" and said Hancock was "compelling (Napper) to provide ineffective assistance to the defendant."

He concluded that Garcia-Soto could not get "a fair and impartial hearing of trial" if the case stayed before Hancock, and that her actions violated his fifth, sixth, eighth and 14th amendment rights.

Presiding Judge David L. Mackey currently has the case and will rule on the motion as well as hearing a settlement conference, which could lead to a plea agreement.