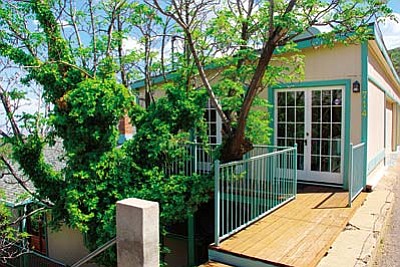 JEROME - The 47th Annual Jerome Historic Home and Building Tour will once again give guests a rare peek inside some of the town's most historic and interesting structures. The tour, presented by Jerome Chamber of Commerce, takes place from 9 a.m. to 5 p.m. over two days, Saturday, May 19, and Sunday, May 20.

A couple of this year's featured homes have never before been on the tour.

According to Donna Chesler, owner of Gallery 527, and one of the key organizers of the annual tour, tickets will be sold beginning at 9 a.m. on Main Street at the old firehouse. The final tickets will be sold at 3 p.m. so latecomers will have two hours to complete the tour by 5 p.m.

Tickets are $12 for adults and $6 for children. Due to the many steps and winding paths on the tour, it is not handicapped accessible.

Chesler explained that this is a guided tour with transportation provided from home to home. At each stop, volunteer docents will tell fascinating stories and history of the homes and buildings.

The Clark Street School, built in 1924, also serves as Jerome's Civic Center and houses town hall, town court, public library and the Jerome Humane Society. This masonry building was the second elementary school on the site, with the first being a wooden structure built in 1905. After Phelps-Dodge closed the mines in 1953, the building sat vacant until the town bought it. The building was leased during the 1970s. It has been home to shops, a restaurant, a pub and a disco.

The Town of Jerome commissioned the old school as the Jerome Civic Center, and in 2011-2012 renovations upgraded the staircases to current codes.

The Boyd Hotel was purchased by the Jerome Historical Society in 1956 from United Verde Exploration. Kitty Boyd, one of Jerome's earliest inhabitants, built it. The original wooden structure was destroyed in the fire of 1899. It was rebuilt with brick.

In 2003, the society began a major restoration project on the building, and in 2004 won the Governor's Heritage Preservation Honor Award. The upper two levels are apartments, and the one included in the tour is a vacation rental.

The Sullivan Hotel might be the most infamous building on this year's tour. Jerome's most famous madam, Jennie Bauters, aka Belgian Jennie, built the building and used it as a house of prostitution in the 1890s. After the building burned to the ground in 1897 and again in 1899, Jennie rebuilt it with stone, much as it stands today.

After her murder in 1905, John Sullivan bought the building and remodeled it as the Sullivan Hotel.

In 2006, Mary Wills and Sally Dryer bought the building and started a major renovation.

The Barbara Fowler Art Studio is new, built in 2011 as working space for Fowler, a textile designer. She will explain the process of creating a design, selling it to a buyer and printing it on a consumer product.

The Miner's Cottage was historically a rental for miners, and the name has become part of Jerome's lore. Construction dates are listed for 1886 and 1891. The home originally covered the width of one small lot. The property now covers three of the original 1898 lots.

Current owner Wendy Jackson has renovated the home to create a vacation rental with an amazing view.

The Cain/Gillenwater home was built in 1898 as a duplex. Today, the house is a residence and vacation rental with what is known locally as a million dollar view. The Gillenwater family purchased the home in 1983. During reconstruction of the porch in 1985, a stash of several bottles of booze was found under old floorboards.

The house is considered to be the closest to SR89A in Arizona.

The Deming/Klagge home was built by bank cashier Paul Deming in 1914. During the 1920s, Deming was acquitted four times of embezzlement before the bank was declared insolvent in 1925. The home has had several owners, but the Glover family of Phoenix bought it in 1958 for $5,000. Current owners Jay and Carol Klagge bought it in 1999.

Visitors will be delighted at the view from this home, known as the "Catbird Seat."

Lawrence Memorial Hall ("Spook Hall") will be the last stop on the tour, and free refreshments will be available. Originally built in 1917 as a garage, this building became the home of one of J.C. Penny's largest stores until being closed by the company in 1953.

The Jerome Historical Society purchased the structure, and it is the main gathering place for town events. Those events include the annual Town Christmas Party, the Polar Express children's party and the famous Firemen's Halloween Ball.

In talking about the owners of this year's featured homes and buildings, Chesler said, "The most impressive aspect is their love of the historic Town of Jerome."