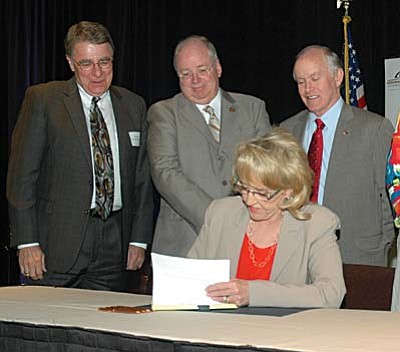 PHOENIX -- Gov. Jan Brewer signed a package of tax cuts into law on that will reduce state revenues by more than $100 million by 2019.

Brewer said the provisions, taken together, should help stimulate the state economy. And that, the governor said, will create more jobs which, in turn, should mean more tax dollars.

The cuts approved by the Republican-controlled Legislature, will not kick in before 2014, a concession to Brewer's insistence that lawmakers not cut business taxes while individual Arizonans are paying higher sales taxes. That temporary one-cent sales tax surcharge, approved by voters in 2010, self-destructs slightly more than a year from now.

They also come on top of a $538 million package of business tax reductions approved last session. Those cuts, also being phased in over several years, will cut corporate income taxes by nearly 30 percent and business property taxes by 10 percent.

In a speech to the Arizona Manufacturers Council where she signed this year's measure, Brewer defended the changes in tax policy.

``We all know that high corporate taxes are job killers,' the governor said. ``They discourage expansion.'

This year's package creates new income tax credits for companies that build or expand manufacturing plants, research facilities or corporate headquarters in Arizona. An analysis of the impact of that by the Joint Legislative Budget Committee puts the price tag on that by 2019 at $20 million.

Another provision says companies that incur operating losses can use those to offset future profits -- and avoid future taxes -- for up to 20 years. Now that carry-forward is good for just five years.

That will cut revenues by more than $12 million.

But the biggest -- and most controversial -- part of the package is reducing the individual income tax rate on long-term capital gains by 25 percent. The cost of that approaches $70 million by 2019.

During legislative debate, Sen. Paula Aboud, D-Tucson, said that levy is imposed when individuals sell things like stocks and real estate. She questioned how reducing the tax on what people pay the state when they sell those items will stimulate the Arizona economy.

And there is no requirement that the funds be reinvested in any Arizona firm.

Brewer sidestepped questions about the stimulus effect of a capital gains tax cut, saying it is just one piece of the package.

``It works all collectively together,' the governor said.

``The bottom line is that we've got states that surround us, like Texas and Nevada, they don't even have income tax,' Brewer continued, putting Arizona at a competitive disadvantage. ``So f we bring all of this all together, it spurs the economy. It's a package.'

Sen. Steve Yarbrough, R-Chandler, one of the architects of the plan, acknowledged the change will mainly benefit those who have money to invest. But he said that does not make it a bad thing.

``If I were a reasonably well-to-do potential investor and I sold stock and I paid less taxes, then I can invest in my business, I can invest in all sorts of other things that will help generate jobs and improve the economy,' Yarbrough said.

He said most Arizonans don't have the resources to create jobs.

``And so, consequently, it's not going to impact us very much,' Yarbrough continued. ``But for the folks who are the job creators, the entrepreneurs, you bet.'

House Speaker Andy Tobin said there is evidence, at least on the national level, that cutting the capital gains tax rate does work to create jobs. He cited the bill signed in 1997 by then-President Bill Clinton, a Democrat, to lower the rate, a decade after Republican Ronald Reagan agreed to have capital gains taxed at the same rate as regular income.

``When he decided to reduce the capital gains after he saw what happened to Ronald Reagan, we did pretty good,' Tobin said. ``We ended up with more money in the coffers.'

And he echoed Brewer's belief that the change in law will bring business to Arizona.

``This is just a good statement that tells the world that Arizona continues to be open for business,' Tobin said.

Glenn Hamer, president of the Arizona Chamber of Commerce and Industry, said this is not a partisan issue. He said New Mexico, where Democrats generally hold political sway, also grants a more favorable tax rate for capital gains than for regular income.