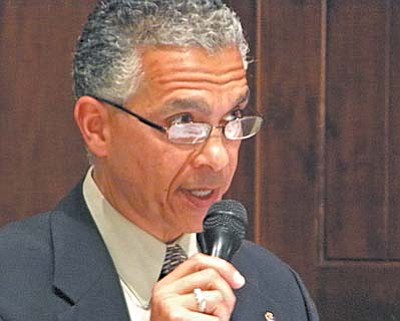 SEDONA -- Three of five board members have been swept from office by a recall vote in the troubled Sedona Fire District.

One of the new board members is the former Sedona Fire Chief, and now the current Chief of the Verde Valley Fire District, Nazih Hazime. Diane Schoen and Corrie Cooperman were also elected in the sweep.

Ousted in the vote, if confirmed, are Board Chairman Dave Blauert, Charles Christensen and Phyllis Erick.

It's unclear at this time when the new board members will be seated.

The 12,174 voters in the Sedona Fire District were asked to vote on three questions, challenging each of the candidates.

Chief Hazime says the recall vote was "overwhelming for all parties. I just think the people were tired of the board that is in there now."

"The current board decided not to act on the budget and will leave it for the new board. We will sit down with the chief and decide what is needed and how much money we have to approve and for what services. We will do that jointly."

How does Hazime think the new board would act differently?

"I wouldn't be spending money randomly and free-lancing the way they have been doing it with high legal fees and expensive audits, things that were very unnecessary. I would work with the board and the chief and take his professionalism and would not undermine the chief, or create any interference, which is what has been happening. "

The new board member says there will be no conflict with the Verde Valley Fire District.

"I won't allow my position as a board member in the Sedona district to affect my duties in the Verde Valley District. I wouldn't pursue the position if I thought it would affect my responsibilities."

"I see my own board now as an example of how it should work: how well we work together and resolve things. It is as tough as you want to make it. It doesn't have to be difficult. As things come up, there is discussion, but its businesses as usual and there are no issues."

Have to canvass the votes and the Board of Supervisors will finalize the votes, 6 to 20 days. Then sign the documents and become official board members.

 40% of the 12,174 registered voters cast ballots in the recall election
Report a Typo Contact
Sign up for our e-News Alerts
Most Read
7 days
30 days