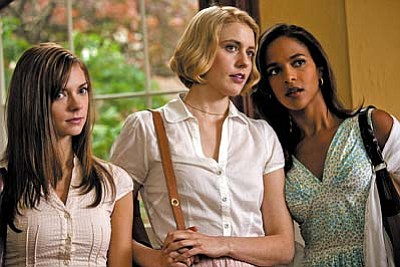 In 2011, the film festival circuit saw the reemergence of work by Whit Stillman who produced three acclaimed films in the 1990s. Those stories involved young, educated, well-off, urbane characters who search for a handle on their lives.

In the amusing satirical Damsels in Distress we have a group of college students in a fictional institution which has recently converted from all-male to coed. This is an unusual institution. The boys in the school are less than brilliant - morons, actually. That's exactly the way they are described (pretty accurately) by the girls who are the focus of Damsels in Distress.

Three of the coeds, Violet, Heather and Rose, are roommates who have set their life mission on the goal of improving mankind, starting with their male college mates.

The idealistic trio (color that delusionally self-absorbed) has formed a college sponsored function called Suicide Prevention Center. They invite students who are severely depressed to come for counseling and to enjoy a doughnut while receiving high minded advice.

When a newly arrived student, Lily, appears at the school they adopt her as a sister in their soul saving universe. That is, they give her lodging in their room and undertake her education in dealing with life, boys and romance. One of the main lessons that Violet (the group mentor) imparts to Lily is that she must abandon the usual search for a boy who is handsome and smart.

Happiness comes more readily from attachment to an inferior male. Improving him will provide the satisfaction that will make a girl happy. It soon becomes clear that Lily is not as uneducated as they believe.

Violet has a boyfriend, Frank, who drops her for another girl on campus. Violet is heartbroken and falls into a deep funk of the kind she is an 'expert' in treating. She disappears for a few days (in a Motel 4, which is cheaper than a Motel 6) and when she returns she pronounces her confidence that Frank will return. "Life is like a river that flows in a circle and eventually all things come back." Then she falls for another guy who then drops her for Lily.

A lot of the fun in Damsels in Distress comes from the less than brilliant boys (the morons) who populate the school.

The fraternities (which have Roman, not Greek letter-names) are loaded with depressed characters or characters who do not know how inferior they are. That's the mission of our distaff group.

For example, Heather has taken up with a boy named Thor. Thor does not know the names of any colors because, he explains, his parents had him skip kindergarten! Heather helps him learn and she is happy for it. Occasionally, a depressed (and maybe drunk) boy decides to end it all and jumps off the balcony of the frat house. However it's only two stories high and the only result is a pair of broken legs.

Violet and the girls have their own demons that arise here, but they are sufficiently pure of soul to cope with them as adults.

I found Damsels in Distress appealing for its silliness with a serious edge. There is no foul language or violence in the film. The students, even the morons, speak intelligible English throughout. All the performers are very good, especially Greta Gerwig as Violet and Analeigh Tipton as Lily.

Damsels in Distress was shown at the Mary D. Fisher Theater in Sedona. Watch for it on DVD in the near future. If you love satires like the mockumentaries of Christopher Guest, or the comedies of Woody Allen, you will enjoy Damsels in Distress.