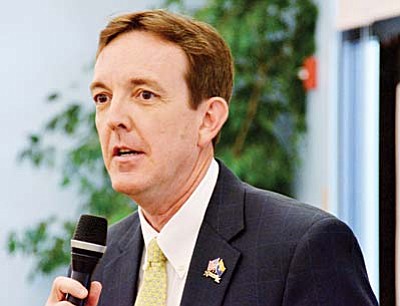 COTTONWOOD -- Ken Bennett may not be running for governor yet, but he is sounding like a candidate. The Arizona Secretary of State was the guest speaker at the Cottonwood Chamber of Commerce luncheon at the Cottonwood Recreation Center Tuesday.

Bennett first cleared the air by discussing his much-reported attempt to verify President Obama's birth. He talked about Arizona's budgeting, and said he had formed an exploratory committee to run for governor.

About 25 of those emails also suggested to Bennett that Hawaii had a law that allowed verification "in lieu of a birth certificate." Since no Secretary of State is going to send an original, Bennett knew, he believed that it would be an easy way to prove the legitimacy.

After all, asked Bennett, "how is three witnesses not better than two?"

The process became plodding and Hawaii wanted to verify Bennett's authority. Someone in the email chain also leaked to the press that Bennett would not allow Obama to be on the ballot without the verification.

Hours after the Chamber luncheon, Bennett announced that he has received the verification to prove the birth in Hawaii and said he considers the "matter closed."

Bennett also made a presentation about the state budget to the Chamber.

When the recession set in and revenues began to fall, the state balanced its spending by drying up Arizona's reserves, by delaying payments to creditors, sweeping money intended for other things into the general fund, borrowing more money and using federal funds, intended as stimulus incentives, for example, to top up the general fund.

Bennett cautioned that spending is now down to $8.3 billion and with revenues $8.6 billion and now, legislators and others are beginning to wonder where to spend the "extra $300,000."

A group is also working to try to make permanent the additional 1-percent sales tax the Governor called for as a three-year stopgap. It will run out in 2014.

Bennett said that he is not allowed to say he is running for governor until his final year in office, but he has already formed an exploratory committee.

His campaign will have three key elements: quality of education, responsible tax policy and regulatory policy. Bennett says for Arizona to be attractive for people to come to the state, make an investment and create jobs, they will want to see those elements.