Red Tee Report: What your golf associations do for you 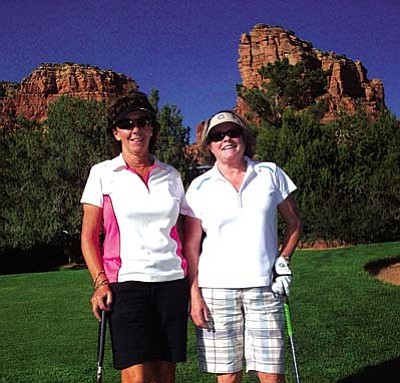 Overall winners in the the OCC Ladies&#8217; Invitational were Lori Zaun from OCC and Suzie Hite from Continental GC in Flagstaff with a low gross of 74

Many of us take it for granted, but for the most part, golf associations are formally organized groups of volunteers that work very hard to run events, and provide support to us for the rules of golf and the handicap system. They deserve our awareness of what they do, our appreciation, and our support.

Locally, our activities are run by OCCWGA. On May 1, we held the OCC Ladies’ Invitational, with 100 entrants from Arizona and beyond.

Many thanks to Tournament Chair Marion Maby for all her hard work, also to the other volunteers who pitched in to make this day so successful.

Congratulations to overall winners, Lori Zaun from OCC and Suzie Hite from Continental GC in Flagstaff with a low gross of 74, and Suzan Doran and Nancy Liddell, from Prescott Lakes GC, with a low net of 59.

Northern Arizona Women’s Golf Association, NAWGA, is a regional association which provides opportunities for competitive golf at a number of northern clubs, with four official tournaments a year, one of which is the NAWGA Seniors Tournament at OCC on May 31.

Also under the NAWGA umbrella are the Interclub series and the Team Play series, both involving eight Northern Arizona golf courses.

To date three interclubs have been held, and while OCC ladies didn’t find their way to the winners’ circle, a pretty good time was had by all.

Finally, Arizona Women’s Golf Association holds its State Medallion tournament in December, for club winners of low net and gross scores over the best two of four field days. OCC winners were announced last month, and Lori Zaun and Ann Glutting will be awarded an AWGA Medallion and will represent OCC in the state tournament.

Congratulations to all the winners, and thanks to those who do the work!