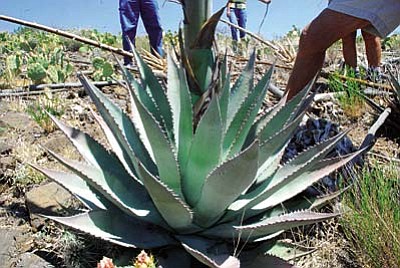 Agave Sacred Mountain was originally discovered near Montezuma Castle in 1995. Eight years later additional stands were found near Sacred Mountain and subsequently identified as a separate species that may have been a &#8220;signature&#8217; plant for prehistoric Verde Valley farmers.

If some were to tell you they had found a garden growing in the middle of nowhere that appeared to have been growing unattended for at least 600 years, you’d be more than skeptical.

You might even think they had been out in the sun a little too long.

But a growing body of evidence indicates that is exactly what a botanist/plant hunter from the Desert Botanical Garden in Phoenix has found. In fact it’s not just one garden, but several.

The gardens Wendy Hodgson has discovered scattered about the Verde Valley did not produce any of the plants archaeologists call the “three sisters” -- the main staples of the ancient Sinaguan people -- beans, corn or squash.

What she found, she believes, are the remnants of agave gardens, planted with a handful of species that had been genetically selected for over a long period of time, perhaps in what is now Mexico, and brought to the Verde Valley by traders.

The agaves are, in Hodgson’s estimate, a product of ancient American culture’s ability to modify plants and grow particular strains based on desired traits.

As early as the 1930s, botanists working in the Grand Canyon discovered some unusual stands of agave. They were unique in that the plants themselves were effectively sterile, unable or severely limited in their ability to reproduce sexually, though seeds.

Instead, the agaves reproduced by vegetative means -- offsets that spout from the parent plant via underground stems called rhizomes or pups.

A few years ago, the same species that had been discovered in the Grand Canyon, called Agave phillipsiana, was found in the Verde Valley, along with Tonto Basin and south of Prescott.

A second strain of otherwise sterile agave, called Agave delamateri was also documented about the same time as the Grand Canyon agave. It has since been found in the Verde Valley also.

Within the last decade Hodgson has described two more varieties in the Verde Valley, similar in their ability to reproduce vegetatively, she calls Sacred Mountain agave and Page Springs agave.

Agave was a food source to pre-Columbian cultures in the Americas as well as the historic Yavapai and Apache people and is even grown today for both food and fermented beverages (tequila).

Historically agave has been used to make paper, soap, shampoos, medicines, for fences and in ceremonial activities. Today, indigenous people in Mexico’s Yucatan use every part of the plant for 40 different purposes.

Humans have processed them the same way for at least 9,000 years according to archaeologists. In arid regions like the Southwest deserts, leaves are trimmed from the hearts and then the hearts are slowly baked in rock-lined pits.

The sweet tasting hearts are then either eaten on the spot or cut and pounded into thin sheets, cakes or loaves and quickly dried to minimize spoilage.

“It’s pretty obvious that agaves were highly valued because that had so many uses. It’s another reason to believe they were cultivated,” says Hodgson.

But not all agaves are edible. Some are downright bitter. Some are poisonous. The ones Hodgson has discovered in the Verde Valley have traits of sweetness, easily cut leaves for ease of harvesting, are less fibrous and produce larger heads (cabazas).

“It’s clear to me they all traits that were chosen for,” she says.

Hodgson has several reason to believe that the agave plants she has found in small stands around the valley is the product of human domestication that took place sometime between 1100 and 1400 AD.

“We have found agave knives laying around in stands of agave,” she says, “And in almost every instance they are adjacent to or in some instances growing within ancient pueblo sites.”

Hodgson says it is also the notion that they reproduce by offsets, as opposed to seeds, that indicates humans domesticated them.

“With sexual reproduction, you get variation. It would make sense to select for plants that reproduce through offshoots from the underground stem.

“With those kinds of agaves, the characteristics you would select for, like sweetness or fiber production, would be fixed and less likely to be hybridized.

“They wouldn’t be as likely to go back to their wild state. That’s why I believe what we are seeing here on the landscape today are actual living archaeological artifacts.

Of particular interest to Hodgson are the two new ones she had recently described, Sacred Mountain, also called Agave verensis and first found near Montezuma Castle in 1995, and the Page Springs agave, first found in 2003 and now called Agave yavapaiensis.

“They are found only in the Verde Valley, as far as we know,” says Hodgson, “We wonder if they were not traded like the others and kept here as signature plants of the valley’s early farmers.”

Hodgson is clear that her theory about the unique agaves she has found growing around the valley is just that, a theory. But she is committed to unraveling the mystery of how and why these strange plants arrived here and what they tell us of the ancient people who grew them.

“We may even be will be able to do some tests and see if fibers found in other artifacts are related to these varieties.

“I’d love to be able to transport myself back to the time when the Sinagua were here and see what was taking place on the landscape. I’d be nice to know how far off I am.”