Serious Interstate rollover on I-17 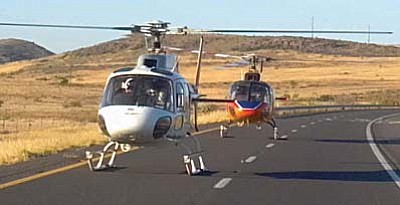 Camp Verde Fire crews were dispatched to a single vehicle roll over on Interstate-17 just after 5 a.m. Monday. A pickup truck traveling south between SR 169 and Orme Road at MP 273 was reported to have rolled as many as five times. As crews arrived they found a heavily damaged vehicle with two occupants still inside. Extrication efforts were needed to remove the occupants from the wreckage and crews treated both for injuries. Both patients were flown by Native Air helicopters to John C. Lincoln hospital in North Phoenix.