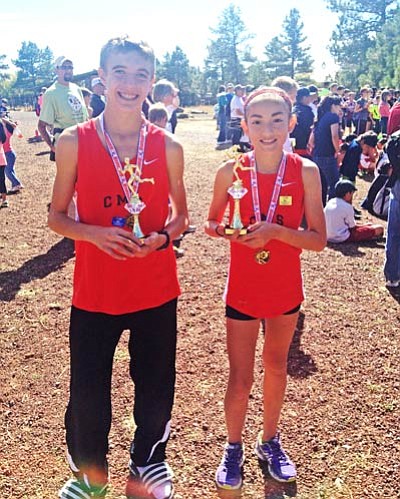 <b>Chris D'Angelo</b> and <b>Allyson Arellano</b> pose for a picture with trophies after a race earlier in the season in Flagstaff. Courtesy Photo

The Estrella Mountain Park course in Goodyear is 2.1 miles long and hosts the junior high state race every year. There are no divisions in the race; it's open for everyone, so placing in the top five means D'Angelo and Arellano are elite runners in their age group.

"I was pretty excited for both of them," said Cottonwood Middle School head coach Micah Swenson.

D'Angelo and Arellano showed great potential the last few years and they set their sights on winning the state race as eighth graders. They missed that lofty goal, but by striving for it they attained greatness. Flat out, some of the best times any runners from CMS ever posted.

"Allyson is a gifted athlete, but I think what's most impressive about her is she does all the little things right, diet, hydration, warm-ups, warm-downs, she does everything methodically, she never misses a detail," said Swenson. "She comes across as a sweet little girl, and she is, but she's also extremely competitive."

Arellano is the top runner for the Aftershock distance club, a team comprised of talented girls older than her. They're working towards running in a national race Dec. 8 in Albuquerque. Swenson said he expects Arellano to break 11 minutes in the two-mile sometime over the next few years.

Swenson said D'Angelo has the potential to break 9 minutes in the two-mile by his senior season of high school because he's got drive. Counter intuitively, Swenson says they need to limit his workouts so he can develop the right way.

"It sounds kinda funny, but we actually try to limit his mileage," said Swenson. "As much as he wants to, I refuse to let him run more than 8 miles at any one time. He wants to run a 10 or a 12, but it's not time yet. The big thing for him right now is developing his speed."

Swenson checked as far as the CMS records go back, and he found that Arellano and D'Angelo placed higher at the state meet than any other CMS runners ever.

"When Allyson crossed the finish line I got a little misty eyed because it was a masterpiece. The way she ran her race from start to finish was terrific. I tried to tell her how proud I was of her, but I couldn't even get the words out. With Chris I can't get that emotional, I have to be a tough guy, but he impressed me with his performance too," said Swenson.