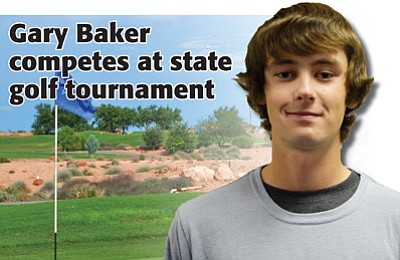 Mingus Union High School's No. 1 golfer, Gary Baker made it to the state tournament and placed 57th in Division II with a score of 159 over two days at the Silverbell Golf Course in Tucson, Oct. 29-30.

Baker qualified for state in the first half of his junior season. He's the first Marauder to play post-season golf in three years, and the first to qualify for state since the AIA set tougher rules for golfers vying for spots in the state tournament. Baker narrowly missed the tournament last year as a sophomore.

"This year they changed the rules and made it a little easier so it wasn't as hard to qualify, but it was still challenging," said Baker.

He shot 77 the first day of state and 82 the second day. The winning score was 140 shot by Billy Comeaux from Sabino.

Baker plans to take a break from golf for the winter months and start practicing again in the spring.

"There's some junior tournaments I might enter into next year outside of high school golf, and I'll just keep practicing on my own," said Baker.

The Mingus golf team will have five seniors next year, all with the potential to qualify for the state tournament. This season, two promising golfers went out with injury before the season even started, including Ryan Sullivan, a player who might have challenged Baker for the No. 1 spot on the team.

"We're the same grade and we've played together a lot, so it was a little weird not having Ryan around for golf season. He was playing very well in the first couple practices we had, so it was a shame he had to go down before the season even started," said Baker.

If Mingus qualifies enough players to field a team in the state tournament, Mai said they have the potential to place well.