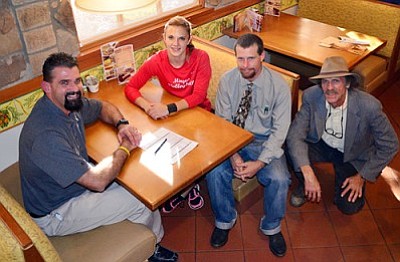 Tuba went on to win the Championship the next day.

"Tuba City's defense was just incredible. It didn't matter what shot we hit or where we hit it, they picked up everything. We could not find a place to put the ball away, and then we started making hitting errors," said Mingus head coach Brian Herman. "They're not the greatest offensively, but they have exceptional blocking and defense - every point we scored took about seven tries."

Tuba won every match of the state tournament in three games, except the match against Mingus; the Marauders were the only team to pick up a game against the Warriors.

The tough five-game matches Mingus played near the end of the regular season against Northwest Christian, Snowflake, and Sedona prepared the Marauders for the five-game first round match against Catalina.

"That match felt like the Sedona match," said senior setter Delaney Scanlan after the victory. Strength of schedule hardened the Marauders throughout the regular season. They started slow, but ended up performing like the team everybody thought they would be.

"We improved every single day," said Herman, "We never stepped back. We always improved. There isn't much more you can ask for. I don't have any regrets about this season. Our girls played great and they did as well as they could. I'm very proud of them -- they fought until the bitter end."

"I originally saw her last year and I thought she had a lot of potential. That put her on my radar. I saw her again this year and she confirmed what I already knew. I love her athleticism, I love her competitiveness, and I love her leadership," said Mooney.

Scanlan will have a shot to start for the Cougars next season. She could have attended a lot of different colleges interested in her to play soccer, track, volleyball, or a combination of those sports, but Scanlan was set on volleyball.

She strived for an opportunity to play her favorite sport in college. Her dream was realized Friday at Olive Garden in Prescott as she revised the paperwork and signed with South Mountain.

"She has done everything that her mother and I have asked her to do. She's a good girl and she deserves this," said Delaney's father Pat Scanlan. "I want to express my gratitude to all of my daughter's teachers and coaches over the years, from Mrs. Chavez at Clarkdale Jerome School to Brian Herman, as well as Buddy Rhodes in soccer, and Mr. Devore in track here at Mingus High. I speak for Delaney's mom as well when I say that we are forever grateful for these people's influence on our daughter."

Scanlan will be impossible for the volleyball team to replace next season. They'll also lose Bailey Mabery, Kalina Boysen, and Holly Drake, all players that factored in huge for the Marauders this season.

The upside for the team is they'll return middles Tristen Meacham and Sarah Cochrane. They've played on varsity since they were sophomores and should be primed to perform as seniors. College prospect Angel Chavez will return to play her fourth varsity season. Backcourt specialist Laura Wylie will also be a senior -- her defense was incredible this season and will be key to the Marauders' going forward, plus they'll have a group of very talented players who have waited for an opportunity to show what they can really do.

Brian Herman said he feels honored to have coached the Marauders the last two seasons, but he doesn't plan to return next year as head coach. He would still like to be an assistant.

"I've invested a lot of time in these girls and it's hard to walk away," said Herman. "I just need to keep my family in mind and my work. It's time for me to move on."

Herman put everything he physically could into coaching volleyball at Mingus, and he still felt like it wasn't enough. Anyone who saw Herman coach over the last two seasons knows he's passionate about the sport, but with a full-time job and young children also requiring attention, it's time for Herman to take a step back.