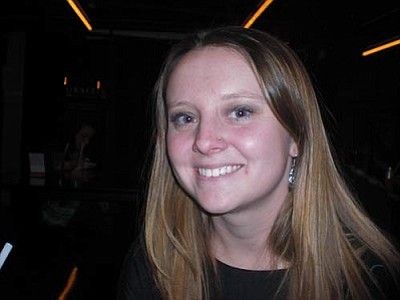 NEW YORK CITY - Melanie Cutbirth joked that when she was growing up in Cornville, weather really wasn't a word in her vocabulary.

That was before she found herself dead center in the path of Hurricane Sandy as it battered New York City on Monday, Oct. 29.

Melanie went through Oak Creek School and Mingus Union High School before earning her bachelor's of science in nursing at Arizona State University.

She lives in Hoboken, N.J. She said she could feel the storm coming on Sunday, Oct. 28. She was scheduled to work at NYU Medical Center at 8 p.m. on Monday. Her boyfriend drove her to work at 2 p.m.

"When I went to work, I definitely knew the storm was coming," she said.

Because she was early, she decided to sleep in the "on-call" room.

Melanie said the storm wasn't raging at that point. "It was raining but there wasn't anything crazy going on."

She said that one of the hospital's buildings was flooded.

"They could hear the water rushing beneath the elevator." Melanie said. "It was like a scene from Titanic."

Melanie works on the 15th floor in a cardiovascular care unit for babies born with heart malformations. These babies have had open-heart surgery.

When Melanie started her shift, a window had broken in one room and a baby had to be transferred to another room.

That was only a hint of what was yet to come that night.

Somewhere between 8:30 and 9 p.m. the power went out for the first time.

"We had to start breathing for the babies on ventilators," Melanie said. To do that, they attached manual Ambu-bags to the breathing tubes already in place.

Melanie stayed on the 15th floor. She said one nurse was assigned for each baby. "You stay with that baby until further notice," she said.

She said the generator on her floor stayed on for five hours, but the decision was made to begin evacuating the hospital at 10 p.m. The sickest and youngest patients go first. So they started to evacuate the 9th floor first.

"They also took our sickest baby," Melanie said. "That baby took 10 people to get him downstairs." That's because that baby had multiple tubes in his chest, a tube in his mouth, monitors and medication pumps.

Melanie's baby was to be the next one to go. But after the first baby was evacuated, the nurses were in limbo for a while trying to get beds for the babies at other hospitals.

"At 1 a.m. the power went out," Melanie said. "Firefighters came through and said "grab your baby and go'"

There was a fire in a sixth floor operating room.

Melanie's baby was the next to go, and it took four other people to help her move her baby with a monitor, medication pump and oxygen.

She said everything at that point is hard to describe.

"It was instinctual," she said. "There was a huge, huge line down the stairs."

At the bottom, dozens of ambulances were lined up around the block. Melanie said the nurses in her unit met in a group with their patients to find out where they were assigned. Melanie and her baby were going to Mt. Sinai.

"It took two hours to go from the unit, downstairs and to the next hospital," she said. "I stayed there until the shift changed at 8 a.m."

Melanie said that as far as she knows, her baby is doing fine.

It isn't easy for Melanie to recall specific images from that night.

"I have flashbacks about going down the stairs," she said. "Most of my focus was on my baby. I can't sleep sometimes because I think about it."

She remembers that the stairwell was very dark and that police and volunteers used flashlights to help light the way down those many flights of stairs.

She does remember some things.

"Being inside the hospital and the fact that it was dark outside made it difficult to see anything that was going on," she said. "But the wind, that was loud."

She explained that the emergency staircase is on the outside of the building and that is what the rescuers and first-responders had to use going up.

"It took two to three people to be able to open the door for them because the wind was so strong," Melanie explained. "And then, when the door did open, a gush of wind blew everything down the hallway."

She said that at one point there was a loud bang and wind started coming through construction doors.

"By the time I got outside, the flood waters had receded, and it was rainy and windy," Melanie said. "The road was full of debris making the ambulance ride a little rough."

Melanie's mother, Wendy Wilson-Cutbirth, lives in Cornville and works for the Sedona-Oak Creek School District Office. She said she wasn't as worried about Melanie during the storm as one might think.

"I always know that Melanie is in control," she said. "It never occurred to me to worry about her."

Wendy did say, however, that she was busy texting her daughter, wanting to know where she was and what she was doing.

In one return text, Melanie told her mother that she had everything ready to transfer her baby and she was going to go help others.

"She's just incredible as far as what she does for people," Wendy said.

A television reporter for KWTX TV in Waco, Texas interviewed Melanie. Before the interview ended, he told Melanie she is a hero.

After the hurricane passed, there was no way for Melanie to leave Manhattan, so she stayed at her boyfriend's brother's place for three days. Then she and her boyfriend went to Boston and stayed with his parents. She got back to Hoboken Sunday night.

"Hoboken is still devastated," she said. She said Hoboken is in the clean-up phase. "The water is gone but huge piles of furniture line the road."

She keeps everything in perspective.

"It doesn't feel like anything is normal yet," Melanie said. "But we'll get there."

She says other people had it much worse.

She said that in the Rockaways on Long Island houses are gone. "They are floating in the ocean. Whole communities are missing."

Melanie said that thinking back to the storm, it doesn't feel real at all.

"It's like I watched a really intense movie," she said. "Otherwise, I'm doing fine."