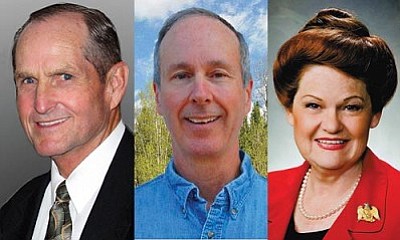 Chester Crandell (left) was elected state senator from District 6 (which includes the Verde Valley) while Bob Thorpe and Brenda Barton were elected to the House.

Legislative District 6 is clearly a Republican District, representing Arizona's Rim country. Both the Senate race and the State Representative seats were captured by the Republicans. Former Democratic Coconino Supervisor Tom Chabin led in that county, but he was rejected by Republican Chester Crandell in Gila, Navajo and Yavapai Counties. Crandell, a Heber rancher who was a House member formerly in District 5. He won the District race by about 5,000 votes.

Likewise Democratic State House candidates Doug Ballard and Angela LeFevre, from Flagstaff and Sedona won their races only in Coconino County, but were topped throughout the district by Republicans Brenda Barton and Bob Thorpe of Flagstaff.

Bob Thorpe is a newcomer, but Brenda Barton is a Republican House member who served with Crandell in District 5.