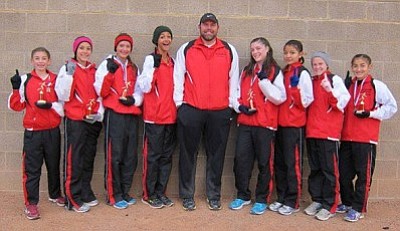 The USA Track & Field Cross Country Championships were held in Tuba City over the weekend. The meet brought together top runners from across the state to compete over the sandy and hilly course at Moencopi Day School. Race conditions were made even more difficult with near freezing temperatures and a strong wind kicking up dust throughout the race.

The Aftershock youth division girls won their 3rd consecutive state title, outlasting an all-star team from the Navajo reservation called Team Run Navajo. Run Navajo brought together girls from Tuba City, Kayenta, Chinle, Ganado, and Window Rock, all major running communities on the reservation. The individual state title went to Nikesha Eagleman of Team Run Navajo, the freshmen star from Ganado who recently finished 2nd at the AIA Division 4 state championships. Her time of 16:23 over the 4K course was a new course record.

The Aftershock girls were close in pursuit, sweeping the 3rd, 4th, and 5th individual slots. The trio of runners was led by Megan Goettl (3rd in 16:40) who ran in tandem with teammate Penny Fenn (4th in 16:42) for most of the race. Just back from the pair was Rachel Valentine (5th in 16:57) who outkicked Kandice Tanner, Run Navajo's #2 girl.

Allyson Arellano came through as Aftershock's #4 finisher followed by Jasmine Banks to round out the team scoring. Once the dust settled, Aftershock won 30-38 over Team Run Navajo to win the state team title. Other members of the youth division team are Karen Arellano, Emma Williams, and Brianna Epperson.

Aftershock also had two girls compete in the Midget division. Swayze Smith of Prescott finished the 3K course with a time of 14:10, taking home the 5th place medal. Also running and qualifying for the regional championships was Sydney Alexander.

The team has their sights set upon the Region 10 championships this Saturday in Albuquerque, a qualifier for nationals. A top 3 team finish will send the girls back to Albuquerque for the national championships on December 8th where they hope to improve of team finishes of 11th in 2010 and 12th in 2011.