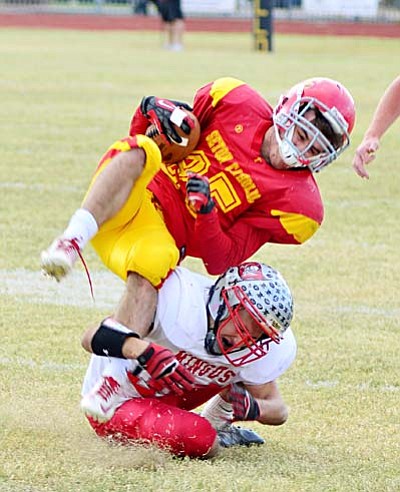 <b>Eric Pierce</b> makes a tackle on a Seton Catholic runner Saturday, Nov 10, 2012, in the second round of the Division IV playoffs at Apollo High School. VVN/Sean Morris

In a back-and-forth contest, Mingus went up, 21-14, when junior Marauder Brennan Kitchen broke several tackles and dove for the end zone on a 20-yard run with 7 minutes left, but Seton Catholic came back and won, 28-21.

"It was a heck of a game. I felt we should have won, we were up seven with six minutes to go," said Mingus head coach Bob Young. "They made some plays at the end, and that's just unfortunate, but our kids played their guts out and gave it everything they had. It was too bad they didn't come out on top."

No. 7 for the Sentinels, Matt Haggerty, caught two passes in the game, both for touchdowns. He caught the game-winning pass from No. 13 QB Ryan Bresnehan (19-24, 291 yards, 4 TDs), an unlikely ending for a game in which Mingus played very well.

Seton rushed for just 18 yards and Mingus rushed for 125 yards. Mingus QB Luke Simmons threw for 240 yards, the most yards he's thrown all season. The Mingus defensive line and blitzing linebackers pressured Seton's QB relentlessly and tallied many sacks (the sacks stats on Maxpreps are incorrect, Jordan Welborn had three in the first half).

It still wasn't enough. Seton's speed at wide-out stretched the field and their passing attack was the best Mingus played against all year. Before the game, people in the know recognized the matchup between Seton's passing game and Mingus' secondary the key to the game. For three quarters Mingus won that battle, but Seton made the plays when they mattered most in rout to eliminating the Marauders.

Mingus players dropped to the field in agony after defeat, not the ending they, nor their supporters envisioned.

In high school football, the process of rebuilding starts now. Mingus will lose a boatload of talented seniors on both sides of the ball, but they've also got some promising players coming back next year.

Brennan Kitchen had his best game against Seton and he'll be a very important player for Mingus next year, possibly playing offense and defense. Fullback Dakota Hanks will return with 12 varsity touchdowns under his belt. Runner Anthony Broyles will hopefully make his return from a knee injury that kept him out of the mix this season. Micah Nevarez, Tanner Carron, and Marshall Shill will likely compete for the QB position.

The backfield looks like it will be in good shape, but how far the team goes ultimately rests on how hard the linemen work to get stronger in the off season.

Here are links to stories picture galleries from the 2012 Mingus football season.

Mingus football advances past Coolidge in first round