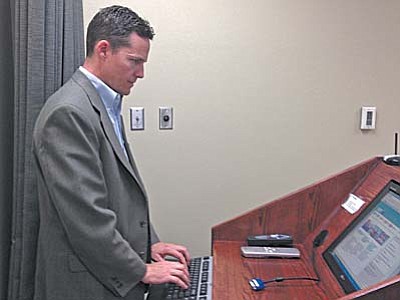 SCOTTSDALE - When people spot a crime or possible criminal here, they can now text or email a tip directly to police - along with pictures and video.

TipSoft, a program launched in August, allows residents to submit tips via the Internet, an app available for iPhone and Android devices or through text messages. The program costs the city $2,400 per year.

Michael Keran, public safety technology and records director for the Scottsdale Police Department, said TipSoft yields about six tips a week, including several that aided an investigation into a series of sexual assault.

"It's not going to replace a 911 call or be addressed as quickly as a call coming into the dispatch center," he said. "But it does build that conduit so that citizens can contact us and share tips with us anonymously."

TipSoft, currently used by 15 police departments in Arizona, is one way police in most larger cities are offering ways for citizens to report crimes online, said Scott Decker, director of the School of Criminology and Criminal Justice at Arizona State University.

"When you think about the growth of the Internet and the way its changed life in America and around the world," Decker said, "of course law enforcement is going to be a part of those changes."

According to an August 2012 study by the International Association of Chiefs of Police, 92 percent of the 600 agencies surveyed use social media in some aspect of their police work.

The city of Mesa also adopted TipSoft and an online service for filing police reports in 2011.

According to Sgt. Tony Landato, a spokesman for Mesa police, the service for filing online police reports has been used more than 1,000 times by people who didn't necessarily need an officer present, saving time for citizens and police.

"We're open to anything that's going to make us more efficient," he said.

While technology solves some logistics problems, it can also create others, according to Decker. In addition to the cost, which is a greater share of the budget for rural and small towns, he said the volume of data that comes through the Internet pipeline can sometimes be a problem for those trying to sort through it and determine what's viable.

"We're all pretty capable of snapping a picture and sending information along whether it's a text or an email," he said. "I think the real challenge is the analysis and the use of that information."

Safeguards against the misuse of online services have been implemented by both Scottsdale and Mesa police departments. There are stringent guidelines on both websites about how to properly submit a tip or police report and what the limitations are.

"To be able to connect with citizens, sometimes that comes at a cost we're willing to absorb," Keran said. "We feel there's more benefit out of building that rapport as opposed just sitting back and letting citizens try to find us."

 Tips can be sent online through an email, text message or mobile application.

 Submitted data and images go through an encrypted server and can't be traced back to the tipster.

 There are 18 agencies using TipSoft in Arizona; 15 are city police departments.