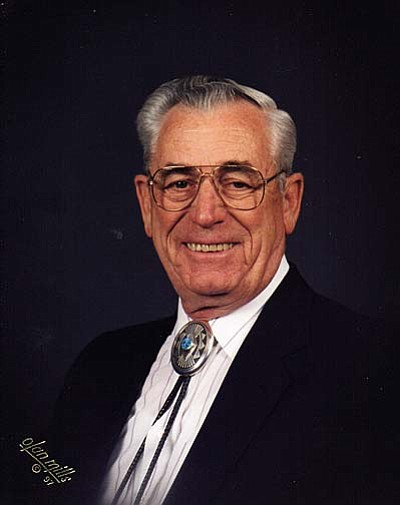 Walter was born September 6, 1924, to John and Willetta Kelly in Sioux City, Ia.  He had 1 brother and 1 sister.   In 1943, Walt graduated from East High School in Sioux City and went on to serve his country in the in the U.S. Army 8th Armored Division from 1943 until he was wounded in Germany in February 1945.  Walt earned a Bronze Star and was awarded a Purple Heart and was very proud of his service to his country.

Mr. Kelly spent 32 years with the U.S. Postal Service and retired as the Manager of Mail Classification in January of 1980.

While in the Phoenix area Walter was a member of the Scottsdale #43 Masons and Order of Eastern Star and was an active member of El Zaribah Shrine clown unit.

In September of 1991 he and Faye moved to Cottonwood, Az. and where known to many in the area.

His life with Faye was a true love story, knowing each other since they were 15 years old and being married for 66 years; they were forever soul mates.

Walter and Faye were devout members of Spirit of Joy Lutheran Church in Clarkdale.

A Celebration of their Life will be held at 9:30am on Saturday, November 24, 2012 at Spirit of Joy Lutheran Church in Clarkdale.

Memorial donations may be made to Spirit of Joy Lutheran Church, 330 Scenic Drive, Clarkdale, Arizona 86324.