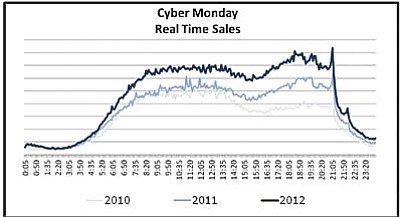 WASHINGTON - Booming sales on Cyber Monday might have meant savings for consumers, but they could also have meant lost revenue for the state of Arizona, a new report said.

The National Conference of State Legislatures said Arizona will watch an estimated $708 million in sales taxes go uncollected this year on online and catalog purchases, the ninth-highest amount in the nation.

"How do we level that playing field?" Murray said. "In Arizona it can mean several hundred dollars on some purchases. It's a huge issue for some of our small businesses."

Those complaints have led to pushes in Washington and in state capitals to require that online retailers collect sales taxes for states where they send the goods they sell.

They come as Cyber Monday sales - online purchases made on the Monday after Thanksgiving - hit a new high for a second consecutive year.

IBM reported Tuesday that online sales Monday rose more than 30 percent over Cyber Monday 2011, as shoppers not only took advantage of online deals but free shipping offers. And, in most cases, no sales tax.

A bill introduced in Washington in 2011 would address that last advantage by letting states apply their sales taxes to online purchases - with an exemption for businesses that have less than $500,000 in remote sales a year.

Under the Marketplace Fairness Act, states would first have to simplify their tax laws before being allowed to levy sales taxes on online purchases.

"At a time when state budgets are under increasing pressure, Congress should give state and local governments the ability to enforce their own laws," said the bill's sponsor, Sen. Michael Enzi, R-Wyo., at an August hearing.

"This will give states less of an excuse to come knocking on the federal door for handouts and will reduce the problem of federal attached strings," Enzi said in testimony to the Senate Commerce Committee.

In Arizona, supporters of the Marketplace Fairness Act include the Arizona Retailers Association and real-estate firms Vestar Development Co. and WDP Partners LLC, according to MarketPlaceFairness.com.

"It is like the title reflects. It is all about having an opportunity to compete fairly," said Michelle Ahlmer, executive director of the Arizona Retailers Association. "What we are focused on is the fairness more than the revenue."

Seattle-based Amazon.com, which has distribution centers in Phoenix, is also a supporter of Enzi's bill.

Arizona last November charged that Amazon owed the state $53 million in uncollected sales taxes from March 1, 2006, through Dec. 31, 2010, according to the company's most recent quarterly earnings report. While the report said the tax bill was "without merit," Amazon also said that it had entered into a settlement with Arizona.

"We are thrilled with the agreement that Arizona reached with Amazon," Ahlmer said. "We think that puts them in the position of being a true Arizona business partner."

The settlement with Amazon comes after state lawmakers earlier this year rejected a bill that would have achieved, at the state level, what Enzi is proposing on a federal level.

"Arizona is a state that would rather control its own destiny," Murray said. "But some folks think there should be something done on a national level because with Internet sales there are no borders."

"It is something that will have to be done in Congress. We have done what we can in the state legislature," she said.

Even if the tax issue is settled, Murray said online firms still have other advantages, such as not having to pay overhead on a physical storefront.

But Rick Marcum of the Yavapai College Small Business Development Center, said the gap between online and brick-and-mortar retailers may be narrowing.

"I've had a couple of them (small businesses) complain, but that is ending with Amazon next year as they will start collecting tax," Marcum said.

"From our small businesses, we hear more complaints about places like Wal-Mart. They have three physical stores here in Prescott," he said.