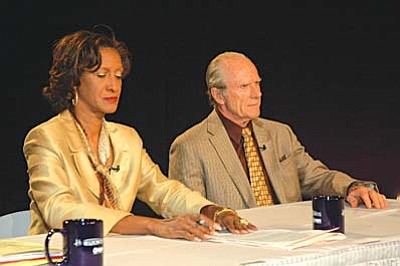 PHOENIX -- The outcome of next month's race for the Arizona Corporation Commission will determine how much more solar and other renewable energy electric utility consumers will have to buy.

Both the Democrats and Republicans, incumbents and challengers alike, say they support the current mandate for all investor-owned utilities to generate 15 percent of their power from renewable sources by 2025. And there were no calls to repeal the current surcharges that utilities can charge customers to promote those sources.

But the three Republicans made it quite clear during an hour-long televised debate on KAET-TV Monday night that they have no interest in raising that figure, not now -- and perhaps not ever. They argued that while renewable energy is a nice goal, the cost to current customers makes it too prohibitive.

"The economy is the critical issue here,' said former state Senate President Bob Burns, hoping to gain one of the three seats on the commission which is responsible for electric, gas, water, phone and sewage rates for private utilities.

"Rates are affected by an increase in (the mandate),' he continued. "In the current economic condition we are in, that increase in rates, I believe, would be very harmful to the overall economy of the state of Arizona.'

"The key to all this discussion is what it costs consumers,' she said. Bitter Smith said it's one thing to leave the current goal in place but "it's not a great economy right now to juggle with a formula that's already working.'

And Paul Newman, the other Democrat up for reelection, said the Republicans are out of step with what Arizonans want.

He cited a study done last year by the Morrison Institute at Arizona State University, commissioned by Arizona Public Service, which said 94 percent of APS customers support increasing the use of solar energy. More to the point, Newman said, they are willing to pay more than the several dollars a month utilities already can add onto customer bills to subsidize solar installations.

Part of the issue surrounds what the commission will consider "renewable' to meet the standard.

When rules were first adopted, the list included things like solar, wind, geothermal and biomass. But last year the commission, which has a 3-2 Republican majority right now, agreed to let Mohave Electric Cooperative count burning trash to meet its goals.

But Democratic challenger Marcia Busching said that definition does not include unsorted trash but was meant for burning biomass, things like small twigs and plants.

"When you put just garbage, rubber, plastics and things like that into a trash-burning facility, in an incinerator, it is no longer 'renewable,' ' she said.

Then there's the question of the future of nuclear power in Arizona. Burns said that has to be part of the mix because of the limits of solar.

"What do we do when the sun no longer shines' at night, he asked. "We need a base of power, a base of energy, and nuclear fits part of that particular components.

The idea did not sit well with Daniel Pout, one of two Green Party candidates.

"Why don't we ask the citizens of Japan?' he said, saying that country is phasing out nuclear power in the wake of the meltdown at one of its reactors.

"There's nothing renewable about nuclear power,' added Thomas Meadows, the other Green Party contender. "It creates more environmental issues than it helps.'

Bitter Smith also said the state has to rely on other sources of energy, including "clean coal.'

"There's no such thing as 'clean coal,' ' Meadows countered.

Also running for one of the seats is Libertarian Christopher Gohl.