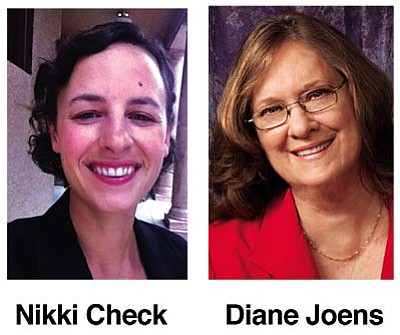 Cottonwood and Jerome mayors, Diane Joens and Nikki Check, are Fall 2012 class members of the Flinn-Brown Civic Leadership Academy. An initiative of the Flinn Foundation in Phoenix and co-sponsored by the Thomas R. Brown Foundations in Tucson, the mayors were accepted into the fourth class of the Academy.

"I am pleased to have Mayors Check and Joens participate in this Academy session. Strong and continued representation from the Verde Valley, Yavapai County, and all of northern Arizona is essential to the dialogue our classes have on pressing state-level issues. We have been fortunate to have had such leaders as Clarkdale Mayor Doug Von Gausig and Yavapai County Supervisor Chip Davis participate in past Academy sessions, and we look forward to growing the cadre," said Nancy Welch, vice president of the Arizona Center for Civic Leadership, which administers the Flinn-Brown Academy.

The Flinn-Brown Academy was created in 2010 to help prepare and support Arizona's future state-level civic leaders who wish to serve--whether full-time or part-time, paid or unpaid--as a member of a state board, commission, or advisory council; an elected official; a state government executive; or a policy advisor.

More than 100 Flinn-Brown Fellows can be found throughout the state, in cities and towns including Kykotsmovi, Flagstaff, Jerome, Cottonwood, Globe, Goodyear, Mesa, Tempe, Phoenix, Vail, Tucson, Safford, and others in between. Fellows represent a wide array of perspectives, walks of life, and employment backgrounds. The newest class includes leaders from Arizona's business, industry, nonprofit, education, and government sectors--including current and former local elected officials.

The Academy is comprised of a 12-session seminar series that helps participants develop a better understanding of Arizona's most pressing public-policy issues, as well as the skills required to take the next steps into state-level civic leadership. Beyond the seminars, the Academy includes advising from a private- or public-sector leader, an individual plan for civic leadership in Arizona, an alumni network, and continued learning opportunities.