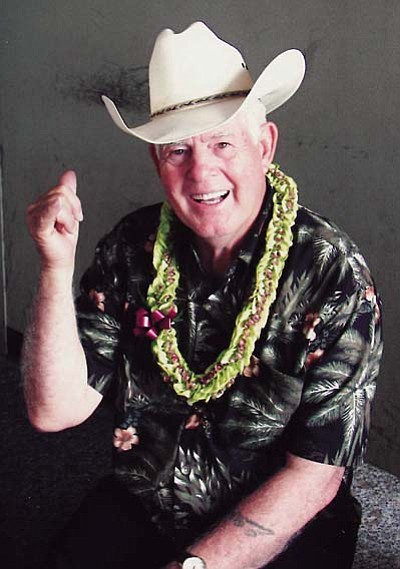 Kenneth E. Earl, a resident of the Verde Valley and Flagstaff since 1947 passed away at his home on October 3, 2012.  He is survived by his wife of 61 years, Norma, five children, Maureen White (Robert), Jayleen Campbell (Ed), Valerie Bonsor (Dale), Craig Earl (Debra) and Kris Earl (Stephanie), 21 grandchildren, 27 great grandchildren, and 2 great great grandchildren.

The Earl family relocated to Sedona, Arizona in 1947, where at the age of 14, Ken helped build the family home.  Ken joined the Navy in 1950 and served on several ships during the Korean War. His home port was in San Diego, CA.

He married Norma June Cook on July 6, 1951, at the Assembly of God Church in Sedona.  Norma’s family homesteaded a portion of Sedona where she was born.  She and Ken met at a family business where she was working. The first day they met, he told her he was going to marry her.

Ken was a general contractor.  He and his family lived in Sedona until 1956, and then moved to Flagstaff where they lived until relocating to Cottonwood in 1969. Ken built numerous single family homes as well as the Earl Apartments located in Cottonwood, and many commercial buildings in other states.  He worked for years with his sons in construction, and with the help of his wife and sons, built his current home when he was 72 years old.

Humor has always been an important part of Ken’s life.  Anyone who had the privilege of having time to visit with him was likely to hear a joke or two. He always had a smile and a laugh to share.  His playful personality will long be remembered by his children and grandchildren.

Ken dearly loved the outdoors.  There was nothing he would rather do than take a drive to the mountains to watch for wildlife.  He especially loved watching for elk.  A memorial service will be held at the Canyon Trails Cowboy Church, 3132 White Bear Road, Sedona, AZ  86336, on Saturday, October 13, 2012 at 1:00 p.m.. 928-282-7463.  A reception will be held immediately following the service.

The family wishes to thank Verde Valley Community Hospice for the wonderful care they provided and the sensitivity and compassion they extended to our entire family.  We would also like to thank the Veterans Administration of Prescott and the Verde Valley.  Information provided by family members.