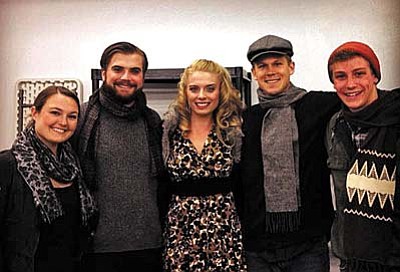 Brian and six of his talented singing friends will start the season in grand style. The singers are Quentin Oliver Lee, Andrew Surrena, Staci Dickens, Emily Wells, Samantha Gorham and Scott Ballantine, who are all part of Northern Arizona University’s prestigious vocal program.

It's like seeing your baby stand up and walk. The Verde Valley Concert Association is proud and gratified to announce that the opening performance of the 2012-2013 concert season on Oct. 20, will feature Brian Lockard, a virtuoso young pianist, who was the winner of the Concert Association's "Ruth Pranspill-Schaefer Award" in 2002.

Brian and six of his talented singing friends will start the season in grand style. The singers are Quentin Oliver Lee, Andrew Surrena, Staci Dickens, Emily Wells, Samantha Gorham and Scott Ballantine, who are all part of Northern Arizona University's prestigious vocal program.

The program includes compositions such as Malaguena by Lecuona, music by Aaron Copland, Rachmaninoff, Liszt, songs from Broadway shows and exciting, new piano transcriptions of famous themes from movies such as Harry Potter. Among other wonderful musical offerings, Brian will play his own arrangement of Gershwin's "Rhapsody in Blue." The musical selections have broad appeal, from comedy to the famous and beloved quartet from Act III of Puccini's "La Boheme."

Brian was born in Phoenix and began taking piano lessons at the age of 5. Soon after beginning lessons, his family moved to Cottonwood, Arizona, where he studied with Dan Edwards and Beverly Hall. While in Cottonwood, Brian was the winner of numerous music competitions around northern Arizona including the following: Verde Valley Concert Association, Quick Memorial, Prescott Fine Arts, Prescott Symphony Guild, Sedona-Flagstaff Symphony Guild, and Catherine Adele.

Brian received his Bachelor of Music in piano performance at Northern Arizona University in Flagstaff. During his junior year at NAU, Brian won the annual concerto competition, and performed Rachmaninoff's Second Piano Concerto with the University Orchestra. He graduated summa cum laude from NAU in 2003, and was chosen as a "Presser Scholar", the Distinguished Senior for the College of Fine Arts, and the Outstanding Music Student for the School of Music. As a result of these awards he was invited to perform Prokofiev's Sonata No. 7 during commencement ceremonies. The year after graduating from NAU, Brian won the Arizona Division of the Music Teacher's National Association Steinway and Sons Collegiate Artist Competition.

In January 2008, Brian completed his first recording with violinist and composer Jonathan Levingston. In January 2009, Brian completed his first solo recording "Brian Lockard Plays Ragtime." This recording was an outgrowth of Brian's involvement with the musical revue at "Black Bart's Steakhouse" in Flagstaff. In that same year, Brian competed in the YouTube Symphony Orchestra Competition and was chosen as one of six piano finalists from around the world.

The 2010-2011 season was Brian's first as accompanist for the Master Chorale of Flagstaff, a 100-member choir conducted by Dr. Edith Copley.  This choir regularly performs with the Flagstaff Symphony Orchestra and performed at Carnegie Hall this year.  2011 was also the year that Brian released his latest recording, "Praise Him! Praise Him!," a collection of solo piano arrangements of sacred music.

Brian currently enjoys teaching a small studio of piano students in Flagstaff, and has been on the faculty at NAU's "Curry Summer Music Camp." He has also been involved in community events as accompanist for the Childrens' Chorale of Flagstaff, and as an adjudicator of local music competitions.  He regularly performs with students and faculty at NAU while also accompanying and coaching the NAU opera program.