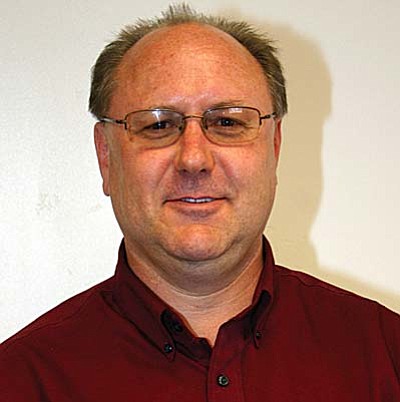 Mingus' Kirk Waddle: “The growth seems to be simply related to a large freshman class. We have to be careful in forecasting because the high school normally loses some average enrollment between the 40-day and 100-day.”

COTTONWOOD - The State of Arizona takes a 40-day count and a 100-day count of students enrolled in all public school districts in Arizona. Although the 40-day count gives districts useful information on where they are with their enrollment, it isn't as important as the 100-day count.

"The 100 day drives the growth and next year's budget," said Kirk Waddle, business director for Mingus Union. "Our ADM (average daily maintenance) at the 40 day is showing growth of 4.45 percent or 50 students."

Since the ADM has a huge impact on districts' budgets, that growth is good news for MUHS.

"The growth seems to be simply related to a large freshman class," Waddle said. "We have to be careful in forecasting because the high school normally loses some average enrollment between the 40-day and 100-day."

David Snyder, director of business services for Cottonwood-Oak Creek School District, said the district is up 14 students at the 40-day count.

He said the kindergarten enrollment this year is 247 students, the largest class the district has had in several years.

"Population this year at MVP (Mountain View Preparatory) is 368 students," Snyder said. "Last year it was 170. We estimate that about 80 of the new students either live out of district or were attending charter, private or home schools last year."

Snyder said the district is still seeing quite a bit of mobility in its student population due to students moving in and out of the district.

"The effect of the growth of MVP helps stabilize our funding," he explained. "We have 25 seventh grade students at MVP this year that will be going into eighth grade next year. With the retention of those students and adding another two kindergarten classes, we should see a population increase at MVP of 60 to 65 students."

Clarkdale-Jerome School did not see an increase in students.

"Our 40-day enrollment number is down 21 students," said Superintendent Kathleen Fleenor. "First grade numbers and fifth grade numbers are up. This year's kindergarten class is down from last year. However, we currently have 24 students in each class."

She said the eighth grade is down this year from last year, and it is the district's smallest class with 21 and 22 students in eighth grade classrooms.

The first grade is the school's biggest class with 27 and 28 students in each classroom. She said that class was big last year and new students have moved into the district.

Fleenor said the district estimates each student brings in about $6,000 in state funding.