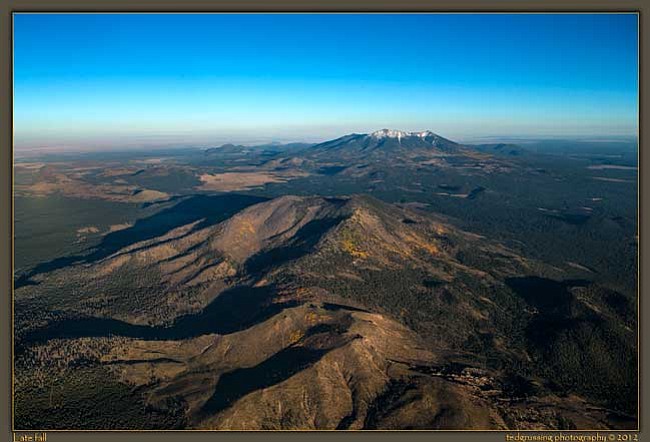 ¡K after my clients left the office this afternoon I headed up to the airport to get a late afternoon flight in. It was the beginning of a new life for me as I left a profession I loved behind me for the last time and began the full time pursuit of my passion since I was eight years old. Really fun to look forward to new adventures and as with every new business/profession I have been involved in always the question as to whether it will succeed as planned. Time will tell, but with a lot of work and a few risks I think it will be okay.

I decided to fly north as I had about an hour twenty before sunset and even though there was some haze, visibility was quite good. I have a number of shots with the rocks in Bryce and Zion in Utah very clear as well as good visibility into Colorado ¡K all from the area of the San Francisco Peaks and West. Mostly I was flying around fourteen thousand feet which is about what I was when I took this shot. I was west of Kendrick Peak and it occupies the foreground and behind it to the east the San Francisco Peaks with a light dusting of snow from about eleven thousand feet and up. Many volcanic cones visible ¡K all the ¡§hills¡- and ¡§mountains¡- up here are dormant volcanoes. Behind the peaks you can see the painted desert. I guess I do do landscape photography too ¡K just from a higher vantage point than my friends. Coming home I shut the engine off about 23 miles N of Sedona and still arrived in the Sedona area a little over twelve thousand feet, cruised around the area as I lost altitude and then landed ¡K had to do an engine restart to get back to the tie down area.

Time to do a wrap on the day as Tuesday is well underway ¡K some sleep ¡K lots of espresso and Tuesday will be a great day. Now down to two full time and one part time job º

Sabbatical
Tens
Probability
A study in white
While others ...