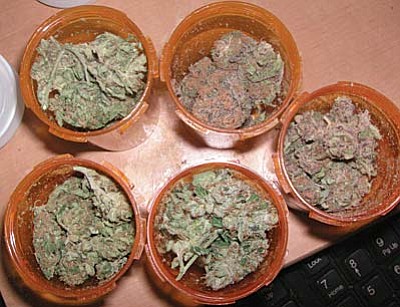 Maricopa County Attorney Bill Montgomery said it's clear that marijuana remains illegal under federal law. And he told Judge Michael Gordon Congress classifies marijuana as a Schedule 1 drug for which there is no legitimate medical use.

What that means, Montgomery argued, is the state cannot do anything that ultimately results in issuing a license to someone to sell marijuana.

If nothing else, he said the requirements of state laws and regulations put public employees in a position where they are taking official action to "aid and abet' others to violate federal law. And that, Montgomery said, makes them liable for prosecution.

But attorney Zeke Edwards, representing people who want to open a dispensary in Sun City, said there's no basis for that fear.

He pointed out that when Dennis Burke was the U.S. Attorney for Arizona he wrote a letter to state health officials spelling out that compliance with state medical marijuana laws provides no shield from prosecution under the federal Controlled Substances Act. But Edwards said that Burke, in listing who might face liability, did not include public employees for processing papers.

Montgomery conceded under questioning that there have been no prosecutions in Arizona. But he said that is irrelevant, saying while this administration may be uninterested in prosecuting public employees who help set up dispensaries, there may be a different administration with different priorities three months from now.

"State employees and county employees should not have to watch debates and follow the course of any particular election to learn whether or not their conduct is going to be prosecuted,' he said.

Most immediately, Montgomery wants Gordon to block a bid by the owners of White Mountain Health Center to open a dispensary in Sun City. But he ultimately hopes to get an appellate level ruling that any action by any government official that paves the way to a dispensary is illegal, effectively banning not only the shops that will sell the drug but the facilities to grow it legally.

In fact, Montgomery ultimately wants courts to say it is illegal for the state Department of Health Services to even issue identification cards to those who have a doctor's recommendation to use the drug.

That, however, is not the position of the state.

He agreed that the state cannot authorize someone to sell or grow marijuana commercially, which is what a dispensary permit would do.

But Grubbe said all the ID cards do is identify those with specific medical conditions for which a doctor believes marijuana would be helpful.

More to the point, the cards can be used by state and local police to show that person should not be charged under state law with illegal drug possession. And that, he said, makes them legal despite federal law.

The fight is over the 2010 law which says those with specific listed medical conditions and a doctor's recommendation can get a card from the state entitling them to obtain up to 2 1/2 ounces of marijuana every two weeks. The plan envisions a network of about 125 state-regulated not-for-profit dispensaries to grow and sell the drug to cardholders.

The specific issue before Gordon stems from a requirement that anyone seeking a state dispensary permit must provide documentation to the Department of Health Services that the site is properly zoned.

In this case, Maricopa County officials, acting under Montgomery's advice, refused to provide the necessary letter. The county is involved because Sun City is an unincorporated area.

Dispensary owners sued, asking Gordon to order the county to issue the letter.

Montgomery told the judge he can't do that.

"If we were to provide that information ... it will lead to the establishing in Maricopa County of a Schedule 1 distribution facility,' he said.

Gordon noted, though, that nothing requires Arizona to have any laws making possession, sale or transportation of marijuana a crime. In fact, he said -- and Montgomery agreed -- the state could decriminalize marijuana entirely.

"Since you can back out of the whole thing, why can't you just back out of part of it,' the judge asked, allowing some people to sell and use marijuana.

Montgomery responded that the Arizona Medical Marijuana Act does not just decriminalize marijuana but actually regulates it. And that, he said, puts it in direct conflict with federal law.

"There is a way to do it,' Montgomery said of decriminalization. "This is not it.'

Gordon called that the "ultimate irony.'

"So maybe the lesson to be learned is that the voters ought not to have been so directed in telling the state how to enforce its statutes,' he said, simply decriminalizing the drug for some without state oversight and regulation.

But Edwards said it should not be necessary for the state to choose between total regulation or total deregulation.

"Arizona has the right to decriminalize some medical marijuana activity,' he said.

Gordon could sidestep at least part of the dispute if he decides he does not want to order the county to provide the necessary zoning certification. Instead, he could declare the requirement for the letter legally unnecessary.