Prepping for next volcanic eruption: Officials gather in Flagstaff to discuss response 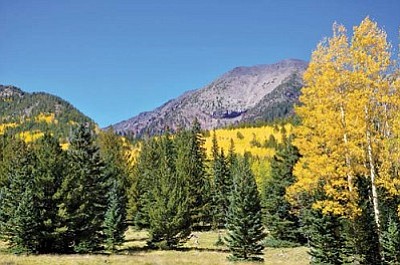 FLAGSTAFF - In the fall of 2010, a hunter scouting deer in the hills east of Flagstaff noticed a smooth red-tinted object protruding from an otherwise coal-black hillside.

When he scraped away the surrounding cinders he realized it was an ancient ceramic vessel.

Fortunately, he did the right thing and turned it over to the archaeologist for Coconino National Forest, who later identified it as Floyd Fugitive Red pottery.

People living in the cinder hills east of the San Francisco Peaks made the Floyd Fugitive Red style over a thousand years ago, but it had disappeared from the ceramic record by A.D. 1100.

The pot was the first and only intact Floyd Fugitive Red vessel ever unearthed.

But that wasn't the only significant contribution it may offer to the area's not so distant past.

Ashes found on the inside were later determined to have come from Sunset Crater Volcano. The distinctly colored cinder cone and national monument on the east side of the San Francisco Peaks last erupted sometime around 1100.

Could it be, some scientists have since wondered, that the makers of Floyd Fugitive Red pottery ceased making it because they were driven from the landscape by the devastation that followed the eruption?

Such a scenario is not just a question for those studying the past. For those whose job it is to prepare for catastrophes, the notion that a volcanic eruption in one of the many active volcanic fields across the Southwest could once again cause widespread devastation is very real.

Last weekend, volcanologists, land managers and emergency management officials from throughout the Southwest gathered in Flagstaff to discuss how they might respond to an eruption they all know will happen, just not when.

The last known volcanic event in Arizona took place between 1100 and 1200, with the Little Springs eruption north of the Grand Canyon. Like at Sunset Crater, pottery sherds dating from 1050 to 1200 were found among the ashes.

Though there hasn't been an eruption for more than 900 years, it doesn't mean all is quiet.

Ed Wolfe, a volcanologist who studied the San Francisco Volcanic Field for the U. S. Geological Survey, on and off from the 1960s to the 1980s, says it's very much alive.

"As a basalt volcanic field it was active for about 6 million years, with Sunset Crater being the last eruption. During that time it has migrated from west to east. You can see that just looking at it. The cinder cones near Williams are old and tired looking. The ones to the east are steeper and sharper.

"Our studies determined that the field has had an average eruption recurrence interval of 3,000 years. That isn't to say they are on a regular schedule, but it gives you the idea that this is still a potentially active volcanic field and the most likely place for an eruption is in the eastern part," Wolfe says.

He says that the larger composite volcanoes in the field, like Sitgreaves Peak, Bill Williams Mountain, Kendrick Peak and the San Francisco Peaks, are the result of prolonged eruptions that occurred on and off over perhaps a million years.

"The field is fed by some fairly significant faults that allow magma to move up from the mantle," Wolfe says.

Who ya, gonna call?

It is the certainty that magma will once again work its way to the surface that has those who study the threat and those whose job it is to minimize impacts, getting their heads together.

As the scientist-in-charge at the Yellowstone Volcano Observatory and a leading voice in the USGS Volcano Hazards Program, conference organizer Jacob Lowenstern is very much aware that although the threat may be low, the impact would be high.

"There are a lot of emergency managers in the state who are aware, a little bit, that there can be volcanic eruptions, but they don't really know who to talk to or who is going to provide information during an event. So we wanted to get together to begin that conversation," says Lowenstern.

"We wanted to hear about volcanoes in Arizona from the experts, since we are the place most likely to erupt next," Trammell says. "But just as important, it was an opportunity to get introduced to one another so if there was any inkling of something happening, we'd all know who to get in touch with."

Put another way, "No one wants to be exchanging business cards during an emergency," says USGS Director Marcia McNutt.

in time
Beyond the peaks
The view from 16,000 feet
Slumbering ...
A Violent Past