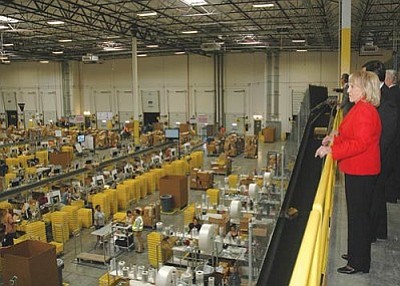 PHOENIX -- The nation's largest online retailer is going to start collecting sales tax on items ordered by its Arizona customers.

Amazon.com announced Friday it has reached an agreement to settle the $53 million assessment against the company by the state Department of Revenue for unpaid sales taxes.

The disclosure, made in a filing with the Securities and Exchange Commission, does not spell out how much the company would pay. The statement called the amount "immaterial.'

But the real victory for the state is that Amazon and its subsidiaries will collect and remit the state sales tax beginning Feb. 1 for any goods sold to Arizonans. And starting July 1, Arizonans who order digital products or services also will be paying the 6.6 percent levy.

In the interim, though, Arizona has agreed not to pursue the company for taxes on sales prior to those dates.

The deal is a major victory not only for the state, which will now benefit from the additional proceeds, but also the Arizona Retailers Association which has fought for years to end the advantage the online giant has over "brick and mortar' retailers that have to impose the state's 6.6 percent tax plus any local levies.

It also makes unnecessary perennial efforts to redefine the Arizona tax code to close what some lawmakers have argued is a loophole that Amazon uses.

How much the state might gain is unknown. Even research reports on the legislation to tax Amazon did not provide an estimate.

Matthew Benson, press aide to Gov. Jan Brewer, said the administration cannot provide any figures on possible financial gains to the state. Even if it could, he said, information about any individual taxpayer is protected by confidentiality laws.

But Benson said Brewer is pleased to be able to put the issue to rest.

"This agreement allows the state of Arizona to settle its dispute with Amazon without resorting to litigation, while securing partial payment and establishing that Amazon will collect and remit this tax going forward,' he said. "Amazon is a quality employer that has invested more than $150 million in Arizona and created thousands of good jobs, and Gov. Brewer is proud to have them here.'

But the National Conference of State Legislatures estimated earlier this year that states lost an estimated $23 billion this year from out-of-state sales, with half of that attributed to purchases made on the World Wide Web.

Michele Ahlmer, executive director of the Arizona Retailers Association, said she was "thrilled' by the action. She said it will make a big difference for local stores.

"Where there is a pricing advantage that is unfair, they can't recoup that,' she said. That difference is not just the state's 6.6 percent levy but other local taxes which can bring the total tax close to 10 percent.

"They can only cut their costs so much in order to compete,' Ahlmer said.

Amazon and other online retailers have been able to escape collecting sales taxes because of a 1992 U.S. Supreme Court ruling which said states can demand the money only if a company has a "physical presence' in the state.

So, for example, the tax applies to purchases made through Target.com because the company also has retail outlets in Arizona. By contrast, Seattle-based Amazon does not.

What Amazon does have are warehouses in Arizona for distribution -- the company calls them "fulfillment centers' -- where goods from elsewhere are processed and sent out to Arizona customers.

While the exact reason for the state's assessment remains confidential, lawmakers argued those warehouses provided the legal "nexus' to the state. And if there were any question about that, Sen. Al Melvin, R-Tucson, offered legislation to spell out that a warehouse is, in fact, physical presence.

That measure failed after the Senate voted 20-8 to kill Melvin's legislation.

Company officials said Friday they "continue to believe the assessments were without merit.' But they agreed to the deal, the "immaterial' payment -- and, most significantly, the requirement to start collecting Arizona's taxes next year.

Ahlmer said she would have preferred that any deal require Amazon to start collecting taxes immediately, ahead of the holiday season. But she said the Feb. 1 start date is probably faster than any legislation that could have been approved.

Anyway, Ahlmer said, that start date is earlier than the company has accepted in some other states where Amazon has already entered into deals to start collecting their sales taxes at some future point.

For example, Virginia Gov. Bob McDonnell announced earlier this year that the company would start collecting his state's sales taxes beginning Sept. 1, 2013. That agreement was designed at least in part to derail legislation to force Amazon into immediately collecting the tax.

Legally speaking, the decision by Amazon to start collecting the state sales tax should not make a difference in state revenues. That's because Arizona law requires those who purchase items from out-of-state retailers to compute and pay "use taxes' directly to the state.

But that provision of the law is largely ignored and little enforced for individual taxpayers, though major manufacturers can find themselves being audited for their out-of-state purchases.